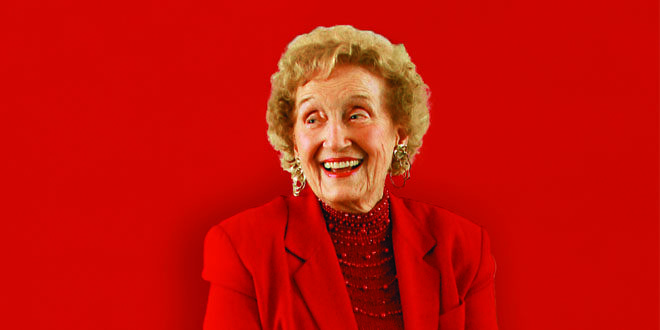 First to accomplish things that no one else had. First to credit those around her for their contributions. First to say, “I think we can.”

For 62 years, Dr. Frances Bartlett Kinne invested her time, talent, and treasure to enrich Jacksonville University. She was widely considered its matriarch. For the Dolphin community, it is symbolic and bittersweet that Dr. Kinne passed away on Mother’s Day, Sunday, May 10, at age 102.

“Fran Kinne was truly an original, a visionary,” says Jacksonville University President Tim Cost. “Her optimism was impenetrable and tenacious; nothing could break her will from creating a positive approach to every opportunity. And she had the rare ability to impart that relentlessly positive spirit in everyone she met.”

The University will hold a memorial service for Dr. Kinne later this year to honor and celebrate her remarkable life. Details will be announced as plans are finalized.

“The only reason we are here is because of the students,” Dr. Kinne remarked during her 96th birthday celebration.

During her 10 years as Jacksonville University President from 1979-89, Dr. Kinne established what is now the Davis College of Business, the Keigwin School of Nursing and the Aviation program. As a professor in 1960, she founded what is now the Linda Berry Stein College of Fine Arts. In 1969, she became the first woman in the world to be named dean of a college when she was appointed Dean of the University’s College of Fine Arts.

Dr. Kinne was born on May 23, 1917 in Story City, Iowa, to Bertha Olson Bartlett and Charles M. Bartlett. Her father published Story City’s newspaper and her mother founded and ran the town library.

Dr. Kinne graduated high school in 1934 and attended the Iowa State Teachers College. She received piano lessons at Iowa State University during the summers for free. She later attended Drake University and received her Bachelors of Music Education as World War II opened. As a young adult, Dr. Kinne worked as a public school music teacher; a choral and instrumental conductor; Veterans Administration recreation director; professor at Tsuda College in Tokyo, Japan; and music consultant for Gen. Douglas MacArthur’s staff in Tokyo. During World War II, Dr. Kinne became a U.S. Army hostess and took charge of providing entertainment for as many as 70,000 GIs.

In 1957, she graduated from the University of Frankfurt in West Germany with a Ph.D. in Music, English Literature and Philosophy after successfully completing an oral defense of her dissertation entirely in German.

In 1958, Kinne moved to St. Augustine and became an Assistant Professor of Humanities at Jacksonville University after being recruited by then University President Franklyn A. Johnson. She founded the University’s College of Fine Arts in 1960 and was named Professor of the Year in both 1961 and 1962. The Business and Professional Women’s Clubs of Greater Jacksonville granted her the Distinguished Achievement Award. During the 1960s, Dolphin art majors grew by 42 percent. In 1969, she became the first female dean of a college in the United States as Dean of Jacksonville University’s College of Fine Arts.

In 1973, Dr. Kinne received the first Florida Governor’s Award for The Arts. She was appointed acting President of Jacksonville University in 1979. While acting President, Kinne established the School of Business and received the EVE of the Decade Award from the Florida Publishing Company.

Kinne was inaugurated as the permanent President of Jacksonville University in 1980 and eliminated the University’s debt within 18 months of her appointment. During this time, she approved the creation of a new School of Nursing, which graduated its first nursing students in 1983.

Kinne launched the University’s 50-year Golden Anniversary Campaign in 1983 and successfully raised $16 Million. In 1986, she was added to the Florida Women’s Hall of Fame and appointed by U.S. President Ronald Reagan to chair the President’s Council of the Independent Colleges and Universities of Florida. Kinne retired as President of Jacksonville University in 1989 and was immediately elected to become the first Chancellor of Jacksonville University by the Board of Trustees.

Kinne married her first husband, Colonel Harry L. Kinne, in 1948. He died of cancer at the Mayo Clinic in Jacksonville on April 26, 1981. She married Colonel M. Worthington Bordley in 1992 and he passed away in 1996.

Kinne published a memoir of her life in 2000 titled Iowa Girl: The President Wears A Skirt.

Kinne had many fond relationships with those she hosted on campus, but enjoyed a much closer friendship with Hope, often visiting him and other friends in Palm Springs.

“When you’re around Fran Kinne – things happen …” Hope once said.