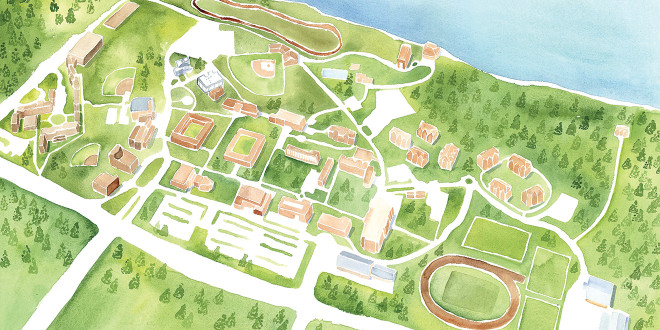 The renaissance at Jacksonville University is picking up the pace as unprecedented opportunities for growth come to fruition. What began as simple cosmetic improvements last year has opened the door for some of the most profound construction projects, land acquisitions, and community partnerships in our 80-year history.

The map across these pages shows projects recently completed, happening now or just on the horizon. As President Tim Cost says, they represent our efforts to become “a university without borders” and are only just the beginning of where we are headed.

Along with the physical changes come new programs. Our Sport Business degree and Master in Public Policy degree (the first and only one in Florida) launched this past fall. The new JU Doctorate of Business Administration – one of only a few in the South – is also fully accredited for fall 2014. We also launched a new online Master of Education in Reading Education this semester, and a new Masters Program in Speech-Language Pathology will debut this fall.

If initial results of our efforts are any indication, we are trending in the right direction. We are in the top 1% of Florida colleges for student Return on Investment, U.S. News named us one of “America’s Best Colleges” for a 10th straight year, and CEO Magazine ranks our MBA program No. 14 worldwide.

Take a closer look and see why JU is making so many waves.

The University recently made history by taking steps towards acquiring 40 acres of riverfront property located immediately south of campus – our largest land acquisition in more than half a century. Developing the land – often known as the “boys home property” – is currently a top priority for the administration and announcements regarding specific projects and timelines are coming soon.

In March 2014, JU dedicated its new 1,000 square feet Student Veterans Center that contains a computer lab, study area and student lounge for our more than 400 student veterans. In other military news on campus, JU recently became the first university to team up with non-profit group Children of Fallen Patriots Foundation. As part of the agreement, JU will provide a 40 percent undergraduate tuition reduction per academic year for children of veterans who gave the ultimate sacrifice.

(View our last issue for details.)

When students return to campus in fall 2014, there will be yet another upgrade to campus dining amenities. Flanking the recently refurbished Riverview Café will be a new deck where students can enjoy an outdoor meal and a bird’s eye view of the campus ball grounds. Measuring 40’x30’, the deck will be able to accommodate 84 students, with combined table and barstool seating.

On June 3, 2013 we broke ground on our new $8 million College of Health Sciences, which will allow our Nursing, Speech Pathology, Orthodontics and future programs to have the critical space they need. JU has made the two-story, 30,000-square-foot structure a centerpiece of its bold $120 million ASPIRE comprehensive campaign, with the new building expected to open by August 2014.

This fall, JU will offer a Doctorate in Business Administration, one of only a handful of accredited such programs nationwide. The degree gives JU its second doctoral program after the University began offering a Doctor of Nursing Practice (DNP) in fall 2011.

Jacksonville University is preparing to break ground on an expansion to the football/lacrosse stadium that will include a 5,500 permanent-seat structure and press box on the west side of Milne Field. The facility will also provide a freshly landscaped east side highlighted by berm seating and standing areas for upwards of 2,500. The project is slated for completion prior to the start of the season.