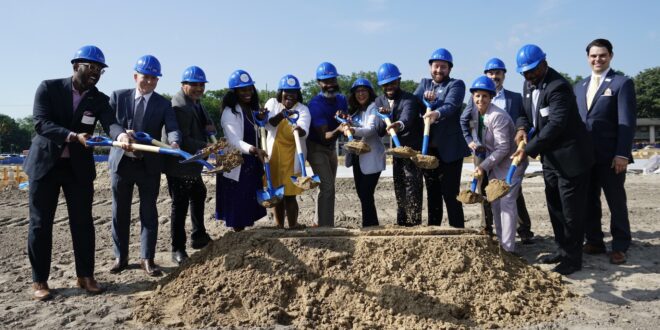 In a step toward establishing a pre-K through doctorate educational hub in Arlington, IDEA Public Schools broke ground on its River Bluff campus April 27 where it plans to open a K-12 school this fall.

IDEA School Florida executive director Adam Miller, Florida House of Representatives Speaker Designate Paul Renner and JU Provost Dr. Christine Sapienza, also a founding board member of the River Bluff campus, were among those who spoke at the ceremony.

IDEA Schools is the fastest-growing network of public charter schools in the country with more than 70,000 students enrolled across its 137 schools in Texas, Louisiana, Ohio and Florida.

The IDEA River Bluff campus expands quality education options through every academic stage and level, creating a bridge from Wilma’s Little People School, a premier preschool located on the JU campus, to the undergraduate to doctoral college programs offered at JU. The tuition-free school will have both a K-5th grade academy and 6th grade through 12th grade college preparatory program.

“If you have had the opportunity to watch what’s happening in Arlington, there’s a buzz,” Dr. Sapienza said. “We are opening up the doors to all to have access to education. Jacksonville University is proud to position ourselves literally next door.”

“Thank you to JU, President Cost and everyone for helping to make this possible,” Rep. Renner said at the groundbreaking ceremony. “What a great partnership this academic hub we have is. Early learning happening at JU, K-12 is going to happen here and of course going back to college and graduating. Some of these IDEA kids are going to graduate from JU in several years once they start through the process and that’s just so exciting.”

Given the proximity to campus, Dr. Sapienza emphasized the possibility for partnership between IDEA and JU, especially as students at the charter school get closer to graduation.

“We want to be the university your students attend, we want to expose students to what university life is like,” she said. “Come across to the campus and see what it’s like. Students should be enjoying our athletic activities, our performances, come into our classrooms and meet college professors. As a first generation student myself, if it wasn’t for mentorship and meeting the right role model, I don’t think my life would be the same.”