Home » All Sections » How to talk productively about race and culture 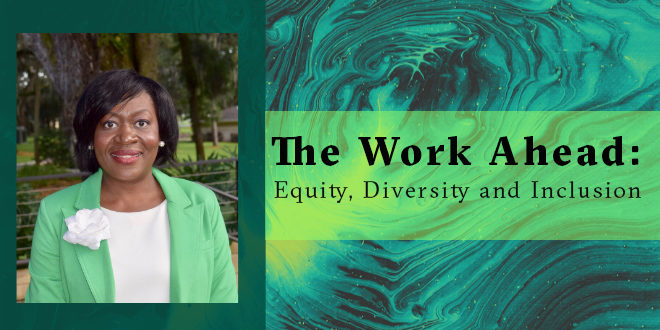 How to talk productively about race and culture

Jacksonville University is committed to creating a safer, more equitable world, beginning here on our own campus. As an institution of higher education, we believe in the power of learning and its ability to reshape our thinking and our behavior. This article is the first in an ongoing series from University experts supporting our efforts to build a more equitable, inclusive, and informed campus community.

Dr. LaTonya Summers is an Assistant Professor of Mental Health Counseling. She is a licensed professional counselor supervisor and founder of the annual Black Mental Health Symposium, a national conference aimed to equip all practitioners with culturally-specific interventions to improve mental health in Black communities. For her work with ethnic minorities, she was honored as a 2016 NBCC Minority Fellow, received the 2017 Chi Sigma Iota award for Outstanding Contribution to Social Justice and Advocacy, and the international 2018 Chi Sigma Iota award for Outstanding Practitioner-Supervisor. Her current research focuses on multicultural issues in counseling and supervision and social justice and advocacy.

Why should we be talking about race and culture right now?

We should be talking about race and culture right now because we are seeing and experiencing the fallout from being silent, scared, and politically correct when it comes to doing so. Currently, we have a national leader who is very vocal, orally and electronically, and Americans have found our voices to discuss taboo issues such as race, sexual assault, suicide, and so on. Unfortunately, we have not had a great model or demonstration of how to initiate or have these conversations productively.

How do you start a conversation about race and culture?

I wonder why a conversation about race and culture can’t begin as any other when you genuinely want to get to know someone better. We should feel just as comfortable asking another person about their race and culture as we are when we ask about where they work, live, or went to school. But for starters, whatever information we want from others we could begin the conversation by offering that information about ourselves. A simple question like “How are you today?” could be followed up or enriched by “How are you feeling today considering all that’s going on in the world or community?” or “I am saddened and angered to see Asian Americans blamed and assaulted for COVID-19. How are you holding up?” or “If I am scared for my Black neighbors or students, I cannot imagine how you might be feeling as a Black woman. How are you feeling?” I normalize discussions about race and culture by beginning my classes as an instructor and my counseling sessions as a therapist by briefly speaking about where and how I grew up and how I ended up in the classroom or counseling session with them. All of those things impact our relationships whether we speak about them or not. It’s better to speak about them. That encourages folks to do the same. Then, when something happens negatively in the world or in our relationships, we’ve already opened the door for continued conversations with those initial discussions.

Who has the responsibility to start a conversation?

The responsibility to initiate conversations about difficult conversations rests on the person who has power and privilege in the relationship. This means a professor, supervisor, counselor, or those in leadership should lead discussion about race and culture. Most people believe it is the responsibility of the culturally-different person to tell others when they feel wronged, uncomfortable, or offended by something the person in power said or did. However, the person with lesser power rarely speaks up or reports wrongdoings for fear of retaliation or backlash by the person in power. My dissertation research was about this very thing–broaching race in cross-racial supervisory relationships. Interestingly, the findings indicated that even when minority people hold leadership positions, they defer power to white supervisees and do not speak about race or cultural differences. Previous research showed that when minority people talk about race with white subordinates they are evaluated harshly, viewed as less expert or credible, or experience other forms of retaliation.

What are some pitfalls that could lead to miscommunication and misunderstanding?

One major pitfall that leads to miscommunication and misunderstanding is not having conversations about race and culture early. Addressing race or culture after an infraction has occurred is too late. In fact, addressing race and culture without rapport-building or establishing a relationship is a pitfall. We are experiencing this across the country now. The world is screaming “Black Lives Matter” and companies, universities, and organizations are following suit but Black students and employees are wondering where the support was when they were being harassed or discriminated against in the classrooms and boardrooms. Another pitfall is not being genuine and congruent. Most people can detect fakeness, nosiness, or prejudice. When one genuinely wants to create an inclusive campus, classroom, or workspace, genuineness and congruence are important. Even now, Black students and employees are wondering if the world’s current interest in Black lives will outlive the next few weeks. One final pitfall I want to mention is simple but is huge, and it is to avoid is mispronouncing a minority person’s name or not honoring how they prefer to be identified sexual orientation-wise. Once, a professor told me that if she does not know how to pronounce her students’ names she does not call them anything. Imagine being a student in this professor’s class and not being called on to give an answer, to receive a compliment, or being acknowledged at all. Correctly pronouncing a students’ name is one of the first and biggest ways to honor them. Moreover, attempts to correctly pronounce a student, employee, or coworker’s name correctly is an amazing indicator of genuineness and congruence. People with power have been known to unapologetically mispronounce and shorten the names of minority people, or nickname them.

How do you recover if you inadvertently say something that leads to miscommunication or misunderstanding?

Mistakes are going to happen, whether we are in culturally-matched or culturally-different relationships. What makes the difference is whether we have a relationship or not, or if we have had these kinds of conversations before. If there is a relationship, then the person of lesser power may feel more comfortable addressing the issue without fear of retaliation or backlash. If a relationship doesn’t exist, and the person with power continuously mispronounces the other’s name, or refers to that person as “he” when they’ve made it known that their pronouns are “she,” “her,” and “hers,” then the recovery process will be difficult or nonexistent.

How do you know when to end a conversation?

I don’t believe conversations about racial and cultural differences should ever end, especially in this sociopolitical climate. Something is always happening and imagine having a culturally inclusive campus or workspace where continued conversations occur about how people feel, how things are being addressed, or everyone is being equipped and deputized with the responsibility to make JU safe for all people. However, when a genuinely productive conversation has been had, it might always end with a “thank you,” or an exchange of contact information, or an introduction to others. All of those are signs of appreciation. On the other hand, a nonproductive conversation should end early. Signs that the conversation is not productive for the person of lesser power might be body language that is not congruent with what is being said, tears, anger, silence, short answers, or not looking at the speaker.

What outcome should you expect from a conversation?

Research has shown that productive conversations about race and culture produce positive outcomes. Some of those outcomes are increased tolerance, less racism and other forms of discrimination, and more productive workplaces, communities, and homes.

How do keep the conversation going?

Long after COVID-19 and the Black Lives Matter movement, conversations should continue at JU but they should lead to action. What speaks louder than words are policies and procedures about how discrimination complaints are handled, showing evidence of rendered consequences for discrimination, having a faculty body that is representative of the student body, having people of color in leadership, and endorsing multiculturally-infused curriculum are just a few examples. Otherwise, it’s just all talk.