Home » All Sections » Hot Off the Press: An Evening of Original Compositions with Your JU Orchestra 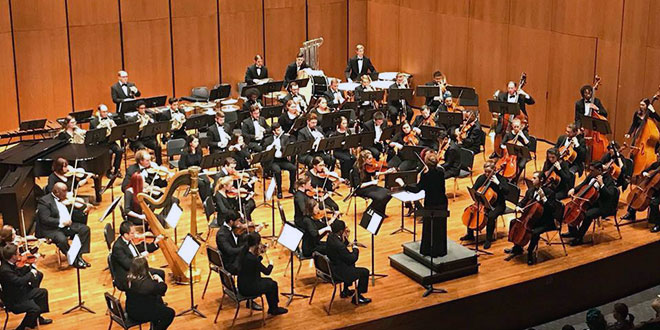 Hot Off the Press: An Evening of Original Compositions with Your JU Orchestra

The Jacksonville University Orchestra will present a program of contemporary compositions on Tuesday, March 6, in Terry Concert Hall at 7:30 PM.  The music, which is “hot off the press,” was all composed in the 21st century, with most of it written only last year.  Featured will be the student winners of the Delius Composition Award from 2016 and 2017, alumna Anne McKennon and graduating senior, Daniel Farrell.  Also featured will be JU’s own Professor of Theory and Composition, Dr. Jianjun He, and guest composer, Dr. Piotr Szewczyk, of the Jacksonville Symphony.

The Delius Composition Award, named for English composer Frederick Delius who lived in Florida in the late 19th century and whose home sits on the JU campus, is given annually to the most outstanding composition student in the studio of Dr. Jianjun He.  In addition to the honor of winning the award, the students are granted a commission to compose a piece for the JU Orchestra.  “Many of these students have had small works performed by fellow students and sometimes faculty, but being asked to compose for a 65-member ensemble is quite a different task,” says Dr. Marguerite Richardson, Associate Professor of Strings and Music Director of the JU Orchestra.  “When I joined the faculty in 2007, the student winners only received recognition—I felt that the orchestra could be a vehicle for the one thing composers want most: to hear their music performed live by real instruments and not on a computer!”  Thanks to Richardson, these performances showcasing student and faculty compositions are a biennial event.

Anne McKennon (BM 2016), already a published composer, will have her composition, Emergence, premiered at the concert. About the work, she says, “I don’t know where the piece came from and didn’t know where it would go. I followed the music. I listened to the voices in my head.” McKennon regularly performs with the orchestra on flute and piccolo, but will be in the audience for her premiere.  Daniel Farrell (BM 2018) plans to continue his composition studies at the prestigious film scoring school at New York University next year, where he was recently accepted for graduate school.  His massive Symphony No. 1, Fiat Lux is a musical tribute to his years at Jacksonville University, as well as a powerful statement about life.  About his work, Farrell says, “As a graduating senior, I wanted to write a piece that embodied the spirit of Jacksonville University. It is for this reason that the principal theme of my symphony is the JU Alma Mater, On the Banks of the Wide St. Johns. Even though part of the Delius award is a commission for an orchestra piece, I wanted to treat this work as though I was giving back to the Jacksonville University community. I’ve learned a great deal here, and I am very thankfully for all the opportunities it has given me.”

“As a graduating senior, I wanted to write a piece that embodied the spirit of Jacksonville University.”

Dr. Jianjun He will be on stage as a member of the violin section for his American premiere of Sonata for Strings.  About the work, he says, “Sonata for Strings is a work of absolute music. It is, in general, a sorrowful piece which reflects the suffering of Chinese people including the composer himself. Combined emotional melody with conventional writing for string orchestra, this piece is pretty accessible to audience.”  Written only for the string section of the orchestra, the piece is full of complex rhythms and angular melodies.

Closing the concert will be Dr. Piotr Szewczyk’s Transposed Memories, the “oldest” composition on the program, having been composed in 2003.  Szewczyk, who is equally at home as a composer and professional violinist, has been a frequent guest lecturer to the JU composition students since coming to the Jacksonville Symphony in 2007.  His Violino Futura Project has brought him national acclaim, as well as his many award-winning compositions, including Transposed Memories, which won the Jacksonville Symphony Fresh Ink Competition in 2008.  About the work, Szewczyk says, “Transposed Memories for Orchestra is inspired by the process of reinterpreting memories in light of new experiences. As the times goes by, our perceptions and interpretations of our memories change in meaning and context. The piece starts with a single line which expands into multiple voices creating denser sonorities, as if a single thought/memory leads to more thoughts, beginning the process of transformation and reinterpretation.”

In addition to hearing these new compositions, audience members will have the opportunity to hear the composers talk about their pieces and meet them after the performance. “Most people would love to get to talk to Beethoven or Bach or any other composer about the compositional process,” says Richardson. “This is a great opportunity to find out what goes into creating new sounds and experiences for the players and the audience, and actually interact with living composers.”  Farrell sums up the experience from the composer’s side by saying, “It is often difficult for people to understand the need for new music by composers to be played live. I compare it to the idea of a blind painter painting a picture, but never being able to really admire their finished work. They know what it looks like in their mind, but they can never see it. This is composition. Without the efforts of other musicians, composers never get to hear their fully realized work. I am very thankful that as an undergraduate, I could approach a project of this scale with an orchestra, and have it performed live. This is an opportunity most undergraduates never have!”

The concert will be presented on Tuesday, March 6, 2018 in Terry Concert Hall at 7:30 PM, and is free and open to the public.  For more information on the performance and any disabilities and accommodations, please contact the Division of Music at 904.256.7370.

Learn more about the College of Fine Arts 2017/2018 Performing Arts Series. Skip the box office and purchase tickets for other CFA events through www.jutickets.com. This easy and efficient process allows you to print tickets at home, have them mailed to an address, or picked up at will-call the night of an event.