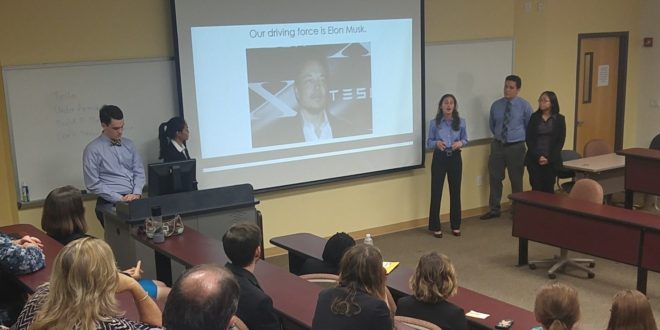 Honors students get a taste of Fullbridge, Inc., boot camp

The Fullbridge seminars, 10 topics over five days with an array of team presentations sprinkled in, are a “finishing school’’ for undergraduates to prepare them to shift their thinking from a strictly academic perspective to include a professional perspective as well, according to Dr. Janet Haavisto, who oversees the program.

“These students are hand-picked,’’ Dr. Haavisto said. “The topics include professional communications, effective teamwork, business and financial analysis and the projects.’’
Participants are put into four teams at the beginning of the week, have two sessions per day and the final two days are spent analyzing a company each team has picked and finally giving a presentation on the final day. While the program has a business bent to it, non-business majors also benefit.

One of those this year was senior Elizabeth Smoller, from Long Island, N.Y., who is a psychology/sociology student and whose team chose to present on Build-A-Bear (Tesla, Under Armour and Craft Brew Alliance were the other companies chosen).

“I know at some point I am going to have to market myself and thought this would be a good way to learn that,’’ she said. “I am so glad I did.’’

Smoller said she initially struggled with accounting aspects of the camp, but, as time went on she adapted.

“It got progressively easier as I picked things up,’’ she said. “Our team was similar to Build-A-Bear, actually. We were doing well in the beginning, went down a little and then got really good at the end.’’

The sessions were coached by Melissa Webster who has a Bachelor of Science degree from Wellesley College and an MBA from the Massachusetts Institute of Technology and extensive management and marketing experience including as Vice President of the Energy Management Group for Skanska. She has logged about 320 hours coaching for Fullbridge, Inc.

“My favorite part of coaching is when people get a new perspective,’’ she said. “There’s the point when they get the priority on the customer, that’s one thing that clicks. That’s usually at the end of day two or the beginning of day three. Then there is the importance of margins as a way of evaluating a company and telling the story, that’s coming in about day three also. Even within individual exercises people start to click.’’

On the other end, Webster said the ability to manage a career is a big take away from the program.

“There are things all week that are broadly applicable,’’ she said. “Their careers are going to go in directions they can’t predict and they don’t know what skills they are going to need but there are skills here that apply everywhere. Presentations skills, communication, teamwork, self-awareness and having an inquisitive mind. You’re the one who has to manage your career, it’s not like the good old days.’’