Home » All Sections » Hitchcock masterpiece arrives with “The 39 Steps: A Live Radio Play” 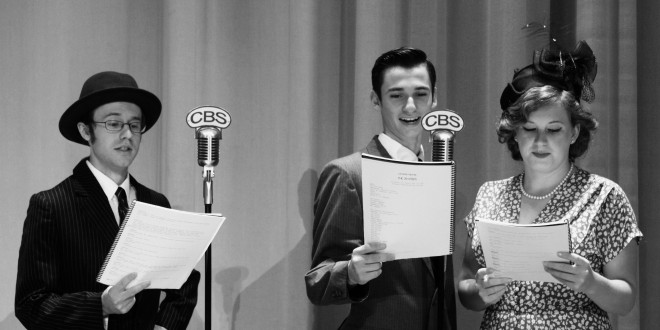 From left, actors in the JU production of “The 39 Steps: A Live Radio Play” include David Bilbray ’14 as Cecil B. DeMille, freshman Brandon Paris as Richard Hannay and senior Ashley Jones as Pamela Stuart.

Hitchcock masterpiece arrives with “The 39 Steps: A Live Radio Play”

It’s a mix of suspense, mystery and live radio as the Jacksonville University College of Fine Arts presents the genius of Alfred Hitchcock’s “The 39 Steps” Oct. 3-4, complete with a 35-piece live orchestra and “Foley” sound-effects artists to help tell the story.

From a re-created Lux Radio Theatre of the ‘30s, audience members can watch a favorite classic radio drama unfold in authentic fashion – right down to live radio commercials and an appearance by Cecil B. DeMille.

Loosely based on the 1915 adventure novel “The Thirty-Nine Steps” by John Buchan, and performed as a live period radio play, this romantic thriller is a fast-paced ride through the signature world of the “Master of Suspense,” Alfred Hitchcock.

The story is about a man in London who tries to help a counter-espionage agent prevent an organization of spies called The 39 Steps from stealing top secret information. Richard Hannay (played by freshman Brandon Paris) is visiting London when he meets Annabella Smith, who is on the run from foreign agents after a disturbance at a music hall earlier that evening. Later that night, Annabella is murdered and Hannay must try to break the spy ring and prove his innocence. He gains the help of Pamela (senior Ashley Jones), a woman he meets along the way.

From an epic train chase to a feisty love interest, Hannay has his work cut out for him as he searches for the truth about The 39 Steps.

“We offered a Voice Acting course in the Theatre Department last spring, and I think this is such a perfect marriage of classroom curriculum content and real-world performance experience for our students,” Jordan said.

Watkins said he was excited to work on the production.

“Louis Silvers’ music absolutely takes you back to the days when radio ruled the airwaves, and conjures up images of our grandparents’ big radios, surrounded by eager listeners,” he said. “It’s Americana at its core.”

Performances are on Homecoming Weekend, at 7:30 p.m. Friday and Saturday, Oct. 3-4, in the Terry Concert Hall on the Jacksonville University campus, 2800 University Blvd. N. Tickets are $10 for adults and $5 for seniors (62+), military and students (w/school ID). JU staff, faculty and students are free (w/JU ID).