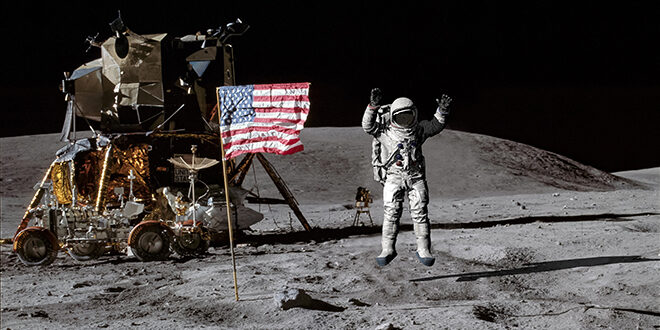 On July 20, 1969, at 10:44 p.m. EDT, Flight Director Gene Kranz gave the “Go” for the moon. Neil Armstrong and Buzz Aldrin undocked the lunar module, named Eagle, and began the powered descent to the moon for the historic Apollo 11 mission.

Up to this point, everything had proceeded exactly according to plan—a nearly flawless flight. But the powered descent to the moon was the most critical and dangerous part of the mission, guided by 43 pages of precise, minute-by-minute steps. There was only enough fuel for one landing attempt. A month earlier, Armstrong privately concluded they had a “50–50 chance” of landing on the first attempt.

Right away, there were problems. Eagle was moving too fast, which meant they would overshoot the landing site by about four miles.

At about 5,000 feet above the lunar surface, Armstrong assumed manual control of the lander. The fate of the mission was in his hands. Armstrong would have to improvise and fly as he had never flown before.

He halted the descent, hovered and then pitched Eagle forward, flying sideways in search of a safe place to land. If the lander failed to land on flat ground, it would tip over and break apart, killing both Armstrong and Aldrin.

Meanwhile, the unplanned maneuvering and extended flight time meant Eagle was fast running out of fuel. The crew was in a race against the clock. With about 20 seconds of fuel remaining – and with everyone in Mission Control holding their breath — Armstrong’s voice crackled through: “Houston, Tranquility Base here. The Eagle has landed.”

Although more than 50 years have passed since Armstrong’s historic flight, we can learn valuable lessons that apply to our everyday lives today – especially in the workplace.

As a fighter pilot in the Korean War, a test pilot, and finally, as an astronaut, Armstrong exuded a certain je ne sais quoi, or, as the writer Thomas Wolfe would later pen, Armstrong had “the Right Stuff.” He was open to new ideas, flexible enough to work through challenging issues, and able to cope when things didn’t go as planned, all the while working in the most challenging and dangerous situations.

In other words, Armstrong was adaptable in every sense of the word.

In business, as in life, the only constant is change. Businesses face an increasing rate of change and complexity that requires constant adaptation. Not surprisingly, employers put a premium on adaptability. Today, employers are seeking employees who are open and willing to learn new things, take on new challenges, adjust to work pressures and develop alternative solutions.

This means it’s critical to highlight your adaptability skills to potential employers to demonstrate how motivated you are to try new things and learn new skills. In your cover letter, make sure to mention a situation in which you exercised adaptability skills— name the problem, the steps you took and the final result. In your resume, be sure to highlight any time when you took the initiative and adapted to unusual circumstances.

The job interview is a place for you to show that you will succeed when faced with challenges. You may be asked directly, “How well do you adapt to new situations?” Simply stating that you handle change well probably will not suffice. Be prepared to discuss specific examples where you exercised adaptability in your past jobs.

If you are currently in school or already employed, you should seek opportunities to improve your adaptability skills by trying new things and challenging your ability to problem solve in various circumstances. Additionally, developing your adaptability can also mean developing other soft skills like communication, interpersonal skills, creative thinking and problem-solving.

The preceding column appeared in the The Florida Times-Union. Questions may be directed to Dr. Shaw at jshaw5@ju.edu. For more information about the Davis College of Business, please visit ju.edu/dcob.