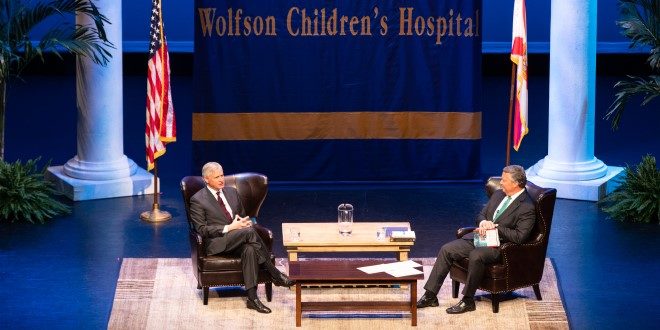 Historian Meacham: Americans should be happy winning most moral battles

Presidential and social historian Jon Meacham says he’s happy to win a bare majority of his internal, moral battles. Americans, he said, should be happy to do the same.

“I don’t know about you all, but if I listen to my better angels 51 percent of the time, that’s a hell of a good day,” Meacham told Jacksonville University President Tim Cost and a Florida Forum audience on Jan. 23 at the Moran Theatre. “We can’t let the perfect be the enemy of the good.  And so the soul of the country is tested from period to period, age to age.”

Meacham, who won a Pulitzer Prize in 2018 for his presidential biography “American Lion: Andrew Jackson in the White House,” discussed society, presidential politics, and impeachment among other topics during the fundraiser for Wolfson Children’s Hospital. President Cost served as both host and conversation partner for the discussion.

Meacham spent much time enlarging on the themes of his most recently published book “The Soul of America: The Battle for our Better Angels.” In the book, Meacham compares today’s tempestuous political and social climate with similar times of turmoil in American history. On Wednesday, he expounded on the book’s central theme “we have endured moments of madness and injustice … we can again.”

“It’s a perennial struggle. It’s not a mistake,” said Meacham. “It’s not an accident that the founders said ‘We are searching for a more perfect union, not a perfect one.’ At our best, we have pushed ahead.”

He also spent a significant amount of time recounting humorous anecdotes about some of his more contemporary subjects – President George H.W. Bush and his wife, Barbara.

“George Bush’s view of life was it was one long reunion mixer,” said Meacham, who wrote about the Bushes in “Destiny and Power: The American Odyssey of George Herbert Walker Bush.” “Usually the Oak Ridge Boys and the Pope would be there for lunch, you know?  And (President Bush) would be more interested in the Oak Ridge Boys.”

Presented by The Women’s Board, the Florida Forum raises awareness and funds for Wolfson Children’s Hospital, supporting its mission to provide the highest quality of advanced pediatric healthcare regardless of ability to pay.