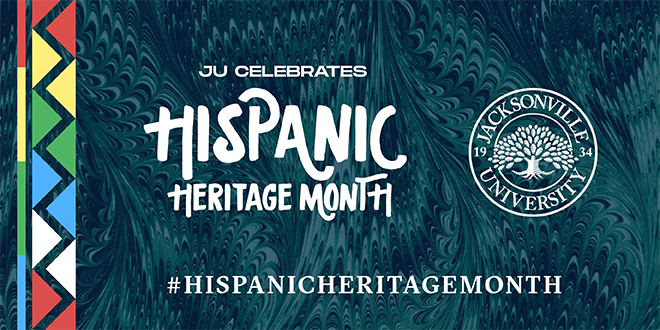 Originally observed as a week-long celebration of the cultures and contributions of Hispanic and Latino Americans, Hispanic Heritage Month was extended from September 15 to October 15 by President Ronald Reagan in 1988. Today, this month-long tribute is a time of festivals, shows, conferences, discussions and community events. Along with the rest of the nation, Jacksonville University is honoring Hispanic Heritage and is pleased to present the following schedule of events.

September 15
Hispanic Heritage Month Kickoff
Kinne Courtyard
11:00 a.m. – 2:00 p.m.
Join us for fun and entertainment as we kickoff Hispanic Heritage Month. This month traditionally honors the cultures and contributions of both Hispanic and Latino Americans as we celebrate heritage rooted in all Latin American countries.

September 23
Movie on the Lawn:  “Selena”
8:00 p.m.
Bring your blanket or lawn chair and join us on the William Circle Lawn for a showing of the movie “Selena.” The film is based on Selena Quintanilla-Perez whose contributions to music and fashion made her one of the most celebrated Mexican American entertainers of the late 20th century. Popcorn and water will be served.

September 28
Latin Dance Lessons
River House
6:00 p.m.
Latin dance has a long history with elements of self-expression and rhythm. Wear your comfortable clothes and learn some new dance moves as we celebrate the contributions of dance to society.

October 7
The long and tragic U.S.-Latin American relationship and the invention of the Hispanics with Dr. Jorge Majfud
River House
12:30 p.m.
Since the Monroe Doctrine in 1823, at least one-third of what is currently the United States and what is known as Latin America have been shaped initially by U.S. pro-slavery expansionist policies and later by big American corporations, which promoted thousands of inventions and bloody dictatorships in the name of freedom and democracy over the last 200 years. Americans and Hispanics in the U.S. have tended to accept this convenient “freedom and democracy” narrative over the facts. It is time to start saying the inconvenient truth rather than waiting for another two centuries.