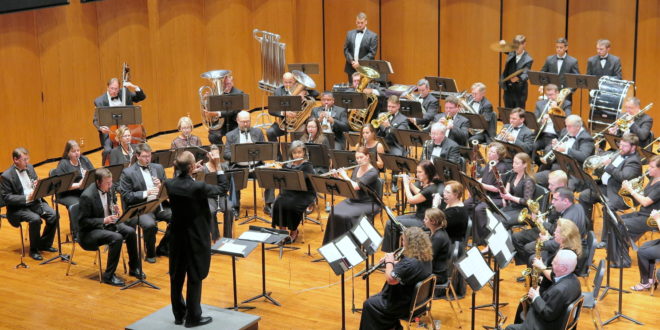 The Jacksonville University Performing Arts Series will present the First Coast Wind Symphony featuring winners of the 2017 Concerto Competition for High School and Collegiate Musicians at 3 p.m. Sunday, April 23, in Terry Concert Hall. The concert is free to the public.

This seventh annual concerto competition was open to all students throughout Florida. The winners each receive a $1,000 prize and an opportunity to perform as soloist with the First Coast Wind Symphony.

This year’s winner in the high school division is Alexandra McGuire, a junior at Douglas Anderson School of the Arts. Alexandra will perform Cecile Chaminade’s “Concertino for Flute.” The collegiate competition winner is Dillon Acey, a music performance major at Jacksonville University from the Osceola County School for the Arts in Kissimmee. Dillon will perform the Weber “Concertino for Clarinet.”

This annual family concert will include music of interest to all ages. The First Coast Wind Symphony will embark on its first international performance tour in June to Salzburg and Vienna, Austria. To mark this event, the concert will include Franz von Suppe’s famous overture, “Morning, Noon and Night in Vienna” and Johann Strauss’ “Thunder and Lightning Polka.”

Other popular works on the program include Gershwin’s “An American in Paris,” a medley of music from James Bond movies, and a rhapsody by Jay Bocook based on the old Scottish folk song “O Waly, Waly.”

The FCWS has released three albums to wide acclaim, Prevailing Winds, A Christmas Celebration and Symphonic Spirit, and a DVD titled Sounds of the First Coast. The group is a member of the Cultural Council of Jacksonville.  More information is available at www.fcwinds.org.