Home » All Sections » Alumnus Jay Thomas 1948-2017: “He controlled every room he was ever in and was the brightest light in it” 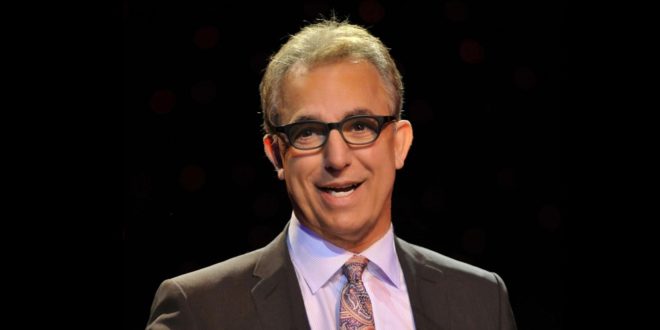 Alumnus Jay Thomas 1948-2017: “He controlled every room he was ever in and was the brightest light in it”

Jacksonville University is deeply saddened by the passing Thursday of Distinguished Alumni Jay Thomas ’72, one of our most well-known and accomplished alumni, a brilliant talent in the arts and entertainment world and a passionate supporter of his beloved alma mater.

As many may know, Jay was perhaps most acclaimed as a two-time Emmy award winner for his role as talk show host Jerry Gold on the CBS sitcom “Murphy Brown.” He was a TV and radio personality who starred in “Mork & Mindy” and “Cheers” as well, co-starred in the feature film “Mr. Holland’s Opus” and other major motion pictures, and appeared in numerous other television and stage productions. He was awarded a star on the Hollywood Walk of Fame in 1989.

Others may have delighted in Jay’s hilarious annual holiday appearances on “The David Letterman Show,” where he told a famously repeated, uproarious story involving a car mishap, his hippie friend in high-heel shoes and the Lone Ranger that must be seen to be truly appreciated. Jay would follow that by, naturally, using his college intramural quarterback skills to try to knock a meatball off the top of a Christmas tree with a football. (“I loved Jay,” Letterman said in a statement Thursday. “His Lone Ranger story was the best I heard in 30 years. Plus, nobody could throw a football like Jay. Maybe Tina Fey, maybe.”).

In his later years, up until just three weeks before his death, he held forth for more than a decade as the unshackled host of The Jay Thomas Show on the SiriusXM 94 Comedy Greats radio channel, where callers and guests were urged to be “as un-politically correct as you want,” as Jay put it in JU’s Wave magazine (see a 2016 article below). He continued with roles in TV crime dramas like “NCIS: New Orleans,” “Bones” and “Ray Donovan,” and used his Shakespearean-trained acting skills in the theater as well.

Jay would be the first to welcome — perhaps even insist on — a blunt description of his personality and performance style: acerbic, witty, candid, rollicking, cogent and at times caustic, but always aimed squarely at making sense of the truth, and the humor often found in it.

In Jacksonville, Jay honed skills on professional radio that would eventually aid in his climb as a top-rated DJ in New York after he left the River City. He arrived at JU to begin his bachelor’s degree in sociology already a regional radio star on WAPE, anointed “King of the City.”

Throughout all of his life after Jacksonville University, Jay kept close ties and grew bonds with many connected to his alma mater, including JU Chancellor Emerita and Past President Dr. Frances Bartlett Kinne, current JU President Tim Cost ’81, basketball Hall of Famer and JU legend Artis Gilmore ’71, and Hollywood producer Pace ’73.

“I will tell you exactly how Jay would say to react to his death: ‘Get the —- over it,” said Pace, a close friend, as he chuckled and choked up at the same time. “That was Jay.”

“One day I was in the parking lot of the old Nottingham Apartments across from campus, and Jay drove in in an old Volvo convertible,” Pace recalled. “I had seen him around a bit, and waved him down. I said ‘How are you?’ and he said, ‘Good, man, how are you?’ I asked, ‘Do you live here? Who is your roommate?’ He looked at me incredulously and said: ‘Don’t you know I make $19,000 a year? I don’t need a roommate!’ He said it with the greatest twinkle in his eye, and drove off. That was my introduction to Jay, and for 47 years we shared every significant moment in each other’s life. He even introduced me to my wife.”

Pace said the pair became especially close after both moved to Hollywood to pursue careers in the entertainment world, sharing many struggles together.

“Jay gave me a philosophy: There’s no room for any of us, so we’ve got to make room for ourselves,” Pace said. “He controlled every room he was ever in and was the brightest light in it. David Letterman once called him the funniest guy in America.”

“But, he would always come back to JU. He never forgot it, the people, the teachers, all of it that affected his life. He loved everything about Jacksonville University, and never minimized it.”

Named a JU Distinguished Alumni in 1992, he was honored as a JU graduate demonstrating “significant professional accomplishments, community and philanthropic efforts and continued support of JU.” He was also named one of 75 Distinguished Dolphins in celebrating the University’s 75th anniversary in 2009, for his “professional success, personal integrity and support of JU.”

Dr. Kinne said it was a joy to watch Jay rise from a student and DJ to a top star.

“I don’t know that I’ve ever known anyone with as quick a response,” said Dr. Kinne, who called Jay a “very dear friend” who kept in close touch.

Dr. Kinne said that what made Jay most interesting was that “it wasn’t just about hit movies, or radio success, or any one thing – he adjusted himself each time to whatever he was trying to achieve.”

“I have such adoration for people like Jay, who I saw give so much joy to people. It’s a reward for us to see because we were a part of it,” she said. “To see him make people happy and to laugh, and not only that, but how many minds he helped… So many times when people become well-known, they sort of forget. But when you find people who are loyal and care about a place and who is there, that’s a big gift. And he was a big gift.”

Gilmore remembered Jay as “someone who hustled, really worked, and was willing to work and do for you in whatever way necessary.”

“He was such a nice person, with a great sense of humor,” Gilmore said. “Like so many other individuals who came out of JU, he truly represented himself well, and always acknowledged being a part of this institution. He was very proud to be a JU alum.”

Jay was exceptional and prolific in his field, and while we mourn his passing, we celebrate a man who brought such robust laughter and thoughtful commentary to the world. Our spirits are uplifted knowing that he loved JU as a place where he made stable, lasting friendships and connections during his education, after having attended several other junior colleges and universities.

Thomas’ agent, Don Buchwald, said in a statement that “Jay was one of a kind, never at a loss for words and filled with so much fun and wonderfully wacky thoughts and behavior.”

We are heartened to know that Jay, who had battled cancer, was surrounded by his beloved wife, Sally, and sons J.T., Sam and Jake  at the time of his death. Our sympathies extend from his immediate family to those in his JU family, who grew so close with him and created lifelong bonds.

“People like Artis Gilmore and Frank Pace, they mean a lot to me,” he told Wave magazine. “It’s the only school where I went every day and had a real college experience. JU was great, and great for me.”

Hi-Yo Silver, Jay Thomas. You made us laugh, and for so many, you saved the day.

From the Fall 2016 issue of Jacksonville University Wave magazine:

With so many broadcast, cable, satellite and streaming TV and radio channels vying for audience attention these days, being on the cast of a show that remains on air any longer than 13 weeks might be considered a grand triumph, perhaps just short of winning an Emmy.

Alumnus Jay Thomas ’72 not only has his own show – The Jay Thomas Show on the SiriusXM 94
Comedy Greats radio channel – but he’s been at it more than a decade, with no signs of slowing. (He mastered the Emmy thing long ago, nabbing two in the early ‘90s for his role as talk show host Jerry Gold on the CBS sitcom “Murphy Brown.”)

For those who know Thomas and his often acerbic brand of comedy-talk (or talk-comedy), the reason for his radio show’s success is clear: He says what he wants, and he lets you say what you want – that is, until he doesn’t let you.

“On my shows, you can call and be as un-politically correct as you want,” said the 68-year-old Thomas, who’s been an entertainer and actor since he was 16 doing strip-club comedy in New Orleans’ French Quarter. “But you can’t just say anything. I just hang up on you. My audience thinks that’s hysterical.”

The live call-in show continues strong in its 12th season with an audience that skews toward 40 and older, although Millennials hop in and out to listen and call in because of its uncensored content.

“Many of these listeners, they’re driving their trucks, or they’re trapped in crummy trailers in the North Dakota oil fields, and we are a lifeline to them,” he said. “As a matter of fact, the other day, my 25-year-old son called from the middle of nowhere up north in Canada, where he was on a moose-hunting trip. He’s at a trading post and says, ‘Dad your voice was coming out of every radio in the parking lot. You are how they get the news!’ I said man, if that’s true, it must be mighty screwed up in that area.”

Nowadays during his spare time, he still picks up meaty supporting roles in TV crime dramas like “Ray Donovan,” “NCIS: New Orleans” and “Bones,” lately enjoying playing “the bad guy.” Thomas is also a contributor on FOX Business and CNN, talking sports, politics and more. He still gets chances to exercise his Shakespearean-honed acting chops in the theater as well – in 2014, he even performed in New York in “Somewhere With You,” a country musical scored by his oldest son, hit songwriter JT Harding. And if he wanted to, he could always take a quick ride from the studio to see his star on the Hollywood Walk of Fame.

Outside of acting and entertaining, Thomas occasionally pursues business ventures, including one he’s excited about launching this fall with his middle son Sam: manufacturing and selling 1,200-square-foot, deliverable hunting and fishing camps made from shipping containers and priced in the $120,000 range.

“Sam just graduated from Berkeley with degrees in global environmentalism and economics, and he’s also a master gunsmith and hunter,” Thomas said. “They are going to be loaded, all wired-in and with plumbing, with full bathrooms, a kitchen, washer and dryer, generator and solar power, cleaning stations, a crane to move animals, a walk-around deck, 8 x 25 screened-in porch and a lot more. All delivered to your location and set up and ready to go. You won’t have to have crappy living conditions anymore when you go on a hunting trip.”

With his career in the often-volatile world of entertainment in its infancy in the early ‘70s, Thomas credits JU as the place where he made stable, lasting friendships and connections during his education, after having attended several other junior colleges and universities.

“People like [basketball legend] Artis Gilmore and [Hollywood producer] Frank Pace, they mean a lot to me,” he said. “It’s the only school where I went every day and had a real college experience. JU was great, and great for me.”