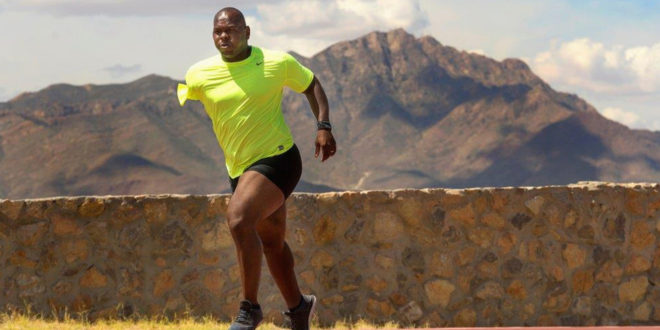 “I never had a Plan A or B … I thought life just worked itself out,” said Haywood Range III.

But after struggling through college, missing important opportunities and becoming increasingly unable to provide for himself, Range said: “I had to do something with my life. That’s when I joined the Army.”

“After all,” Range said, “the only thing more American than football is serving our great nation.”

Haywood played football for Jacksonville University from 2006-10, with 64 solo tackles, 55 assists for 119 total tackles on his record. But he left his star status and fellow math majors before making it to graduation, and says of that period in his life, “I wasn’t making the best choices.”

Now, he aspires to finish his degree, coaching, competing in the 2017 Invictus Games and possibly recapturing some missed moments.

Enlisting on June 7, 2011, Range, a Florida native, completed basic training at Fort Benning, Ga. He was sent to the National Training Center at Fort Irwin, Calif., to prep for deployment to Afghanistan. Later that September in the Mojave Desert, his unit’s gun truck flipped down a mountainside and left several injured, forever changing the trajectory of Haywood’s life–a young man who said yes to JU in a desire to attend a great school closer to his hometown of Jupiter.

It was at Fort Sam Houston that he first met other wounded warriors and they introduced him to a new way of thinking. Unable to remember exactly how many procedures he endured during his years of recovery, Range has the highest admiration for the injured and medically retired vets he’s met along way.

“We all just push each other and motivate each other,” he said.

Many surgeries and medals later, Range has checked back into life and returned to his love of sports, all with the support of his wife, Whitney, and their four children.

His post-recovery activities have included two triathlons, the 2014 Endeavor Games, the Texas Regionals, the Department of Defense Warrior Games 2015 and trials for the U.S. Paralympics, to name a few. Last year, Range brought home silver in both discus and the 800-meter run, only a meter away from snatching gold in both categories. This year, Range was again numbered among the more than 200 wounded, ill,or injured warriors participating in the DOD Warrior Games’ eight event categories.

Only 29 and a fan favorite, Range walked away with the gold in his injury category for men’s standing shot put, throwing 9.89 meters. With his help, Army won overall this past June.

Range also represented Army in the 2016 Invictus Games in Orlando—a first for him. He earned silver in discus and shot put.

“It’s amazing getting to meet people from other countries,” Range said about his experience. “The medals, they’re nice, but the friendship… talking and laughing with them, is amazing.”

A very emotional Whitney Range said of her husband’s achievements, “He’s so much more—so much bigger than the medals.”

Range is the embodiment of an overcomer. “I understand now that with God all things are possible… even with just one arm,” Range says. It is with this resolve that he looks forward to what comes next.

For certain, he’s on to Canada for the 2017 Invictus Games. He’s training year-round and also exploring the option of adding javelin to his impressive skill set. Coaching is a definite possibility in the years ahead, he said.

Because Range cannot add JU alumnus to his long list of accolades, he has a word of advice for current JU students:

“The time you spend in school passes so quickly, and that’s something you have no control over. What you do have control of is what you do with those years… recognize how important they are to ensure you have a strong foundation before heading out into the real world. I wish I’d buckled down and taken those four years seriously. I can’t go back. Focus, get your degree and walk away knowing that you gave it your all.”