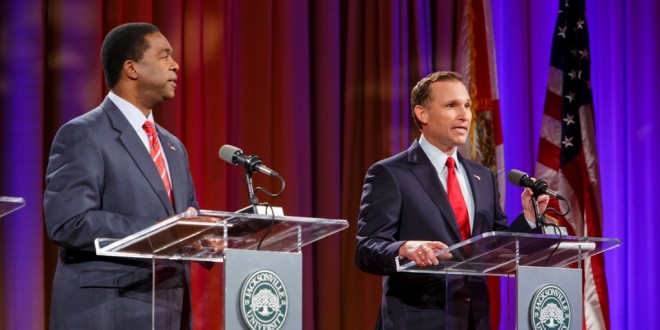 May 11, 2015 All Sections, Arts and Culture, Current Affairs, Events

If voters claim to hate nasty attack ads and inane slogans, why do these seem to be the candidates’ focus?

Actually, the candidates are being very logical and following the advice of their political consultants.

This anomaly — candidates appearing to pitch what voters want least — results when campaigns target the most persuadable voters.

People who follow elections most intently, often those who are the most partisan and ideological, are relatively immune to campaigns — and the process tends to reinforce their initial preferences.

The logical focus throughout the campaign then is the undecided voter.

After months of campaigning and a couple million dollars in commercial messaging, most people who will cast a ballot by May 19 have already decided how they will vote. (The JU Public Policy Institute will co-host the final Jacksonville Sheriffs and Mayoral debates May 13-14 with WJXT TV-4).

The still undecided voters — a relatively small portion of this voting universe — are the target of the campaign. They are often characterized as “low-information, low-interest voters.”

Many voters may not be happy with the election choices available and claim to be undecided, but most of these less-than-satisfied electors have already grudgingly made a decision.

As such, the target of the campaign is not so much on the thoughtful voter but on the least informed and least interested part of the electorate. That focus on the “low-information voter” occurs throughout the campaign but becomes most intense in its latter stages.

Though small in total numbers, the undecided voters are a large enough segment to swing the election.

How do you best reach them?

Basically, you hit them over the head with repetitions of the same market-tested sound bites and attack ads. Candidates know that techniques appealing to fear, among the strongest of human emotions, turns off thoughtful voters, but those folks have already made up their minds.

This approach drives all aspects of the campaign, from selection of TV commercials and mailers to how much emphasis should be placed on debates. These strategies are primarily driven by pursuit of the least-informed voters, those who have yet to decide.

Labeling some voters as least informed does not mean they are thought to be stupid. In fact, many intelligent and educated people pay little attention to politics but still feel compelled to vote as a citizen duty.

Similarly, there are quite a few others deeply involved in politics who are not well informed. This is the nature of the system, and part of the irony of democracy is that a small number of swing voters who are undecided — often the least-informed and least-interested portion of the electorate — are the focus of campaigns.

Thus the political strategy has to be geared to those who previously had not bothered to learn much about the candidates and issues.

Who is to blame for this dismal scenario?

The candidates, who are actually behaving quite rationally in seeking victory?

The political consultants, who are getting the candidates to do what is necessary to win?

In the end, the answer seems to be “the system.”

As Pogo in Walt Kelly’s 1971 classic cartoon observed: “We have met the enemy and he is us.”

Dr. Stephen Baker is a Jacksonville University professor emeritus of political science. This column also appeared in The Florida Times-Union.