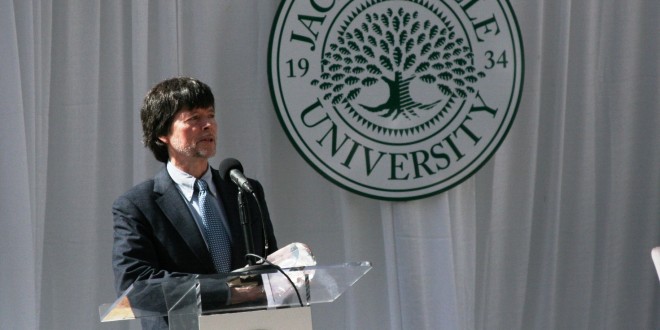 Jacksonville University honored pioneering documentary filmmaker Ken Burns with its second Presidential Global Citizen Award on Tuesday, Feb. 9, recognizing a master storyteller whose profound achievement in creating powerful historical narratives has had a far-reaching effect on millions of viewers across the world.

“The problems, events, heroisms and leadership that we exhibit are also traits that are common to all of our complicated and striving world,” Burns told the audience in describing the motivations behind his uniquely American-centric works. “When we embrace that nuance and complexity, we find a great deal of similarity in all of us; no longer are we divided by red state or blue state, male or female, young or old, black or white, but we become human beings. And that has been in some ways the major impetus of all my films. Each asks the same question, over and over: Who are we? This strange and complicated people we like to call Americans.”

Burns also met afterward with faculty and staff in a special discussion of his work, and curated a world-premiere in the University’s Swisher Theater of never-before-seen footage from two of his upcoming documentaries: “Jackie Robinson” and “Vietnam.” (See a gallery of photos from the day’s events below.)

The award comes as Jacksonville University dramatically expands it reach and impact in the region. President Tim Cost said the University was honoring its rich tradition of bringing the highest-quality speakers and thought leaders to the region.

“Today’s honoree has told some of the most compelling stories of our time, and I think is the greatest storyteller of our generation. He embodies everything about the Presidential Global Citizen Award that we are here to talk about,” Cost said. “When it comes to exceptional educators and an enlightened discourse, I believe Ken Burns stands head and shoulders above all others.”

In his more than 30-year career, Burns has directed and produced some of the most acclaimed historical documentaries ever made, including “The Civil War,” “Baseball,” “Jazz,” “Lewis and Clark,” “The War,” “The National Parks,” “The Roosevelts” and, most recently, “Cancer: The Emperor of all Maladies.” He is routinely placed at the very top of lists of the greatest such filmmakers of all time.

“We are honored to have Ken Burns on our campus as the recipient of the Presidential Global Citizen Award,” said JU College of Fine Arts Dean Dr. Henry Rinne. “He redefined the art of documentary filmmaking over the past 30 years, creating works that combine sensual artistry with the teaching of history. Mr. Burns crafted a new form for the documentary, incorporating visual and aural techniques that result in both an entertaining work of art and a reflection on the historical narrative. We are especially excited about the opportunity for our students to interact with Mr. Burns and to experience his latest projects with firsthand commentary from the artist himself.” 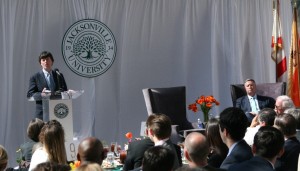 After presenting the award and leading a lengthy standing ovation for Burns, Cost invited the audience to listen in as he and the filmmaker sat in armchairs on the rostrum and discussed Burns’ work and vision.

Asked about the often-visited theme of race in his films, Burns said it is wrong to consider the U.S. to be in a “post-racial” era.

“People say that’s the case. Well, no we’re not. We will continue to wrestle with it for a long time. We still judge people on the color of their skin rather than on the content of their character, as Dr. King said,” he said. “And I just find that in the stories of American history, more often than not, we find questions of race. We have to deal with it and not run away from it.”

In his discussion with students and faculty afterward, Burns talked about the common threads of the more important figures he’s interviewed over his lengthy career.

Burns screened the opening of his next documentary, the two-part “Jackie Robinson,” airing April 11-12 on PBS, and also an explosive beginning montage from 2017’s 10-part “Vietnam” that visually wound time backward, using chronology as a stirring metaphor for the complex choices and sometimes misguided decisions that led to and prolonged the war.

“Then when we later see it forward, it will perhaps be in a new way,” he t0ld the audience afterward. “We speak in psychology of unpacking our history and we’ve done a very bad job. In fact a good deal of what I think is wrong with our country today is the way our differences have so metastasized that we now consider ‘the other’ just not even human beings. I try to do a film that’s straight down the middle, that also more importantly reminds us of our better angels, that might permit us to have an opportunity to relearn what has taken place and perhaps unlearn the sort of hated principles of what we used to do pretty well: that we can vehemently disagree and still share something in common.”

Burns’ films have been honored with 14 Emmy Awards, two Grammy Awards, two Oscar nominations, the Peabody Award, the Lincoln Prize and the Steinbeck Award, among many others; and he is the recipient of the Academy of Television Arts & Sciences’ Lifetime Achievement Award. “The Civil War” was proclaimed by Real Screen Magazine as the “most influential documentary of all time.” 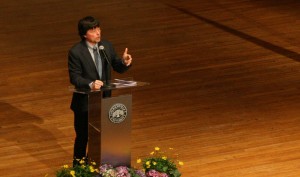 The inaugural Jacksonville University Presidential Global Citizen award was given in 2014 to PepsiCo Chairman and Chief Executive Indra K. Nooyi, one of the world’s most influential and innovative business leaders, and a champion of critical societal issues such as sustainable commerce efforts and healthful food industry practices.