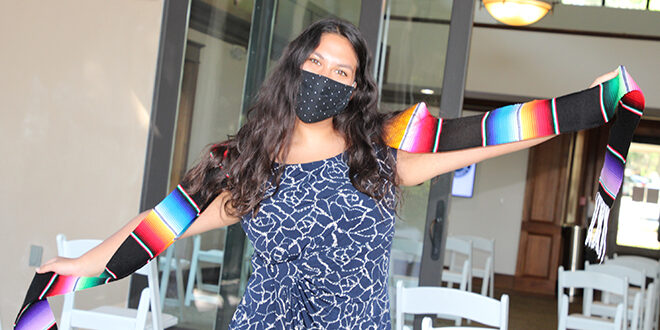 Jacksonville University’s office of student inclusion works hard to foster an environment where all students can feel seen, heard and valued. From intentional programming to passing on opportunities, student inclusion exists so that underrepresented students can reach their potential from the moment they’re accepted at JU to the time they graduate.

A pivotal part of this programming is the annual Multicultural Graduation celebration. Spearheaded by Patrice Abner, director of student inclusion, the event first took place in 2019 as a means of celebrating the achievements of minority students.

“I was looking for ways to recognize people’s academic accomplishments because there are so many diverse populations at JU,” Abner said.

The ceremony features a keynote speaker, a student photographer, and if possible, African American vendors from the local area to promote local talent and services. The first year that Multicultural Graduation was held it was done on a bigger scale. However, due to COVID-19, some of the festivities have been scaled back, and more caution is being exercised. Students planning to attend were given an opportunity to register, and their guests were advised to attend the event virtually.

“This year I’m trying to be more cognizant of where people are and see who truly feels comfortable with gathering.” Abner said.

At Abner’s previous institutions, multicultural graduation had become an arena (literally and figuratively) for minority students to celebrate their accomplishments. After admiring the event and how well it was received, she determined that a similar event was needed at JU. In this space, students are singled out for a greater purpose, and the recognition they receive lives on from class to class. When asked about the environment, Abner had this to say:

“It gives underrepresented students a more casual place to be seen and acknowledged for their academic success.”

This year, in the midst of a worldwide pandemic, the ceremony also gave students a chance to reflect on their accomplishments under extremely challenging circumstances. One of several highlights of the evening was a special gift from Jacksonville University’s Black Alumni Network Executive Committee.

“We hope to inspire them by leading through example,” Veronica Session Fennell explained. “Our executive committee finds joy in giving back to the university and its students. We wanted them to feel inspired to get involved with the JU BAN in the future and become future change-makers for the university.”

As assistant director of affinity and regional engagement for Jacksonville University, Chelsea Shakelford was equally inspired by the gesture, a first for Multicultural Graduation. “Jacksonville University’s Black Alumni Network exists to trailblaze for minorities and underrepresented groups on campus,” Shackelford said. “One of the network’s core values is to engage current students and alumni through scholarship, so we hope this tiny gesture will encourage them to stay connected after graduation and consider investing in future students one day.”