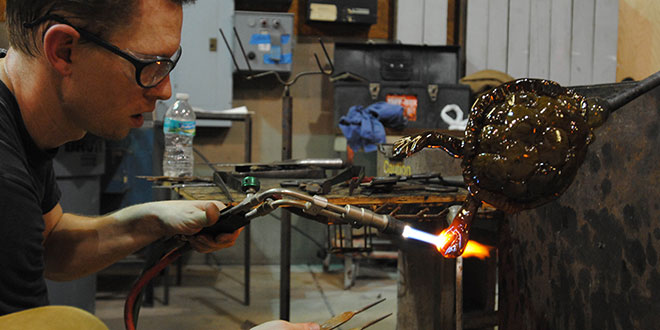 It was built using glass, copper, brass, fire, water and more. More importantly, it was born of imagination, discipline, frustration, joy, hurdles, victories, natural talent and, above all, collaboration.

‘River Table’, a stunning, 14-foot treasure trove of complex glasswork that enchants the viewer with a frozen-yet-fluid representation of river flora and fauna, is on display now at the Cummer Museum of Art & Gardens as part of its “Reflections: Artful Perspectives on the St. Johns River” exhibit.

With it, sculptor Brian Frus, assistant professor of glass in JU’s College of Fine Arts, has arguably reached the apex of an already accomplished career. The 35-year-old 2001 JU alumnus has pulled from the furnaces of the University’s glass studio what many would undoubtedly call his masterpiece – so far.

Wave Magazine sat down with Frus to learn more about his process and how ‘River Table’ came to be.

So, how do you begin?

I get out my sketchbook. There’s a lot of joy, trepidation and anxiety. I get excited and look for ideas. Most of my work is inspired by natural forms … In my own drawings, say of a tree, I may draw what’s inside that tree, the layers that become the rings, and the ground and the roots below, because I find that interesting and beautiful structurally … For this, when I really decided what I was going to make, it all started to set in. I realized I’m making the largest single piece of artwork I’ve ever constructed. Problem-solving is a massive part of the creative process.

They are plate-glass, a half-inch thick, like you’d find on a door to a bank. So massive I couldn’t actually cut and score them the way I can with stained glass. So I had to engineer that, too, because I wanted a beautiful rippled edge running up the surface. Lee & Cates donated all the flat glass and tabletops, and then I worked with Rubin Iron Works here in town and used their waterjet cutter. Picture a jetstream at 90,000 psi. It’s like carving the Grand Canyon in seconds instead of millennia.

After that, you’re into the guts of the project.

I knew I needed lots of legs. I pulled 80 to get the 40 I used. Each one has its own characteristics and coloration. I had a plan for that, but as an artist you can only do so much planning, and then you have to do some making. Then I started sculpting the plants for the top, starting with the grasses … then life-like lily pads in the fresh water, cattails in the fresh-to-brackish zone, and reed grass in the brackish-to-salt zone.

Did you feel pressure?

There was lots of pressure I put on myself to make good. I use that as a motivator. But I have a lot of support. My students have helped me … Sure, I’m always afraid that I’m going to fail at something, but I’m not afraid to try it because I recognize that the failure might be part of what develops into a successful route.

You talked earlier about the piece being representational.

Some were fighting me on staying true to the life in the river. I’d been meeting with Marine Science faculty. I wanted to keep that realization, but I knew I must take some artistic liberties to engineer it. It’s finding the balance. I had to think and debate … can a cattail really only be in freshwater, or could you find it in a brackish area? I challenged myself to keep consistent with the real inspirations I was taking from science, math, engineering, communications, artistry …

Was there less margin for error in creating the marine life down below?

I talked to our Marine Science Research Institute faculty, with buddies who are fishermen, and I researched images … I wanted to pay attention to detail. Colorization was a big hurdle, and sculpting had its challenges. … When something is longer on the pole, there is more that can go wrong with it. That first turtle, it looked like a wonky vase. I was so frustrated. But then you try again, reassess the colors, make sure you have a plan. The final turtle, he’s swimming and I’m super thrilled with it. But it took getting over emotional and mental hurdles. I feel that if I fail, my students will see that I didn’t know how to do something, but that’s of great value to them to see that.

What does it ultimately take to create a big piece of art?

The absolute first thing is passion. If you’re not passionate about getting involved in a big project that is an outputting of yourself for the public, if you don’t love what you do, it’s going to show. You also have to have fearlessness. If you let the idea of it stop you, you’ll never get anywhere. I’d also say a willingness to do the work of managing your time, leveraging resources and finding supporters. I had to apply for grants with JU and other places. To make it in the real world, a professional artist is also a businessperson.

And finally, you need people. They are what drive a project like this. You can try to go it alone, but with large projects, especially with glass blowing, you need a team. In the studio, I’m the commander. Sometimes you have to get loud. It can sound like barking, but it’s all orchestrated with the others. The timing is critical. I may have to holler: “Are you ready? Bring that now! Get that color … Go for it!”

It’s very choreographed. Everyone has their place, their time, their rhythm … their flow.

“I challenged myself to keep consistent with the real inspirations I was taking from science, math, engineering, communications, artistry …”

River Table is an art assemblage that demanded hundreds of hours of work over eight months, and whose scale and engineering difficulty even creator Brian Frus hadn’t anticipated, He had to call on every facet of his imagination and skill to accomplish what he had envisioned. Here’s an even deeper look at the conceptual, technical, construction and artistic process Frus went through to complete River Table:

Tell us about your collaboration with JU Marine Science faculty.

Once I came up with an idea to celebrate the river in a way that was representational, instead of artistically adjusted, I met with Marine Science faculty. Dr. Lee Ann Clements and I connected, and it was neat for me to be able to work with scientists and have that back and forth. In fact, their original comments to me that our river changes to fresh to brackish to saltwater sparked an idea in me, and I thought, oh my gosh, I’m going to do something that fits with my whole aesthetic of transitions.

What was your first construction hurdle?

You think: “How am I going to put this together? How will I attach a glass leg to a glass table?” I came up with a design of a tabletop, with legs that had hidden hardware under glass flowers. It has to be elegant… Eventually I pulled the first table leg, a long post which became representationally the grass growing up through the water. Then I had to figure out how to drill a one-inch hole down into the top of that post into glass, to support a hidden bolt. So I did a bullgrind into the top edge to make it concave like a bowl, and then I could find the low point and use a water-fed, sintered diamond core drill to make the hole. Problem-solving is a massive part of the creative process.

Marrying grasses to a flat tabletop couldn’t be easy.

How do I flip that over to drill into it for a bolt? I can’t put pressure on those fine grassy tips. So I cut pieces of eighth-inch thick plate glass into puddle forms that would be the rippling effect on the outside where the grass comes from, and then glued that piece of grass right on top of that ripply, puddly piece. Now I have a piece of glass with a perfectly flat section on it, and I could flip it over and support the plate glass part on two rails, with the glued-on grass hanging down between those rails. Now I could make it level for my drill press. It was an aesthetic part of the tabletops themselves, giving a little more life to that watery surface, but also an engineering answer.

That’s a moment some artists might say, “Well, I’m not going to do the grasses after all.”

Will is a big part of it. This is my first big museum show. Go big or go home was my mindset. … I’m not interested in making dinky little things. I went through a whole gambit of ideas, but I kept coming back to this. Other people told me, “Wow, this is going to be amazing, but you know, one of these tables would be beautiful enough.” And I said, “Yeah, but I’m thinking 10.”

How do you push back against your own doubts during such a huge undertaking?

That’s something I’ve had to overcome even before this project, as an artist. I remember when I was in school, I had never learned Reticello, a high Venetian glass-blowing technique that makes crisscrossed glass with a tiny bubble in the middle of each one. I realized I was just afraid I would screw it up. Finally I said I’m tired of being afraid of this thing, it’s not a precious thing, it’s just a piece of glass. Let me just try it. And the very first one I did was a success. Now I tell my students that story, and I say I don’t want you to be afraid. It’s just glass. Pull them and then pull more and more, so much that it doesn’t become precious anymore.

Of note: This isn’t Frus’ first joint effort with the Cummer, nor is it his first endeavor to transfer the knowledge and expertise he gains from commission work to students in the JU Glass Program. In 2013, for example, he shepherded a project in which glass chandeliers made by more than 30 JU students, faculty and alumni adorned the annual Cummer Ball gala fundraiser. He’s also an advisor on a massive, four-story-tall lighted glass tulip sculpture planned for the new Unity Plaza gathering spot on Riverside Avenue that has all the making of becoming an iconic image of Jacksonville worldwide.

For more on Frus and his work, visit www.brianfrus.com.