Home » All Sections » “Ghost of JU” to make annual appearance 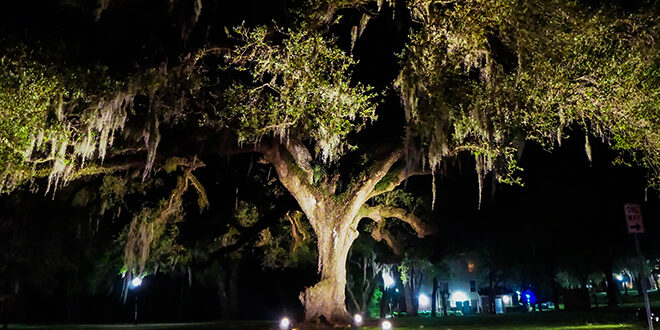 It has been said that at this very time of year on the campus of Jacksonville University, when the classrooms are dark and the offices empty and the mighty branches of the centennial oak twist skyward toward a moonless night, the spirits appear. On the playing fields, in the cafeteria, on the stage of Terry Concert Hall — the ethereal apparitions are known only to those brave enough to venture out after dark and to those bold enough to participate in the annual Ghost of JU Write-a-Thon.

Created by adjunct English professor Dr. Connie Duke, the write-a-thon is a round-robin-style event that celebrates the season while cycling contributors in and out of a collective writing experience that will ultimately produce three ghost stories, each with a different introduction and setting. A single paragraph is all that’s provided before the writers take over. From there, the fun ensues, and according to Duke, that is entirely the point.

“In my previous position, I saw many students who didn’t want to write,” Duke shared. “They would groan and had sort of a ‘kill me now’ attitude about it, so I wanted to create something that would be different and fun and that would do some good for the larger community. When I came to JU, I explained the concept, and they said ‘go for it,’ and now we’re in our fifth year.”

Duke has seen participation in the event increase every year, and it now draws nearly 150 contributors. Students, faculty and staff are all welcome, and some students receive extra credit for participating. Duke will even provide free food on exam day for the English class with the highest participation and the most funds raised.

While there is no cost to participate, sponsorship forms are available, allowing writers to seek supporters who will pledge a certain dollar amount for each minute of writing. Any funds the event raises are donated to the Literacy Alliance of Northeast Florida, which is represented at the write-a-thon by members of its leadership team who can recruit volunteers and tutors for their organization; and the Art Creation Foundation for Children, an arts based non-profit organization created for the personal growth, empowerment and education of children in need in Jacmel, Haiti.

Last year, the write-a-thon raised $433, and Jacksonville University President Tim Cost matched the donation total, effectively doubling that figure. At the time, the open-air, socially distanced event was one of the few extracurricular activities occurring on campus, and Duke believes that added to its appeal, which has already exceeded her own expectations.

“To involve everybody and see everyone having fun with this, is what it’s all about,” Duke said. “I’ve had students come back to participate, even though they’ve finished their English credits. I’ve had basketball players and lacrosse players bringing their sticks and coming right from practice to contribute their 15 minutes. I love it.”

Throughout the event, several of Duke’s students serve as ambassadors, welcoming writers, accepting their donation sheets and helping them get started at one of the three computers set up under the gazebo in the Council Courtyard. Each computer is devoted to a different ghost story, and as soon as a computer is free, writers can sit down and add their creativity to the mix.

When not writing, participants can play games, like cornhole, and help themselves to cookies. Duke baked more than 14 dozen last year and anticipates needing more than that this year. She does so at her own expense and out of her own joy of writing. Her payoff is watching her students embrace the creative process in a way they may have never experienced it before. She has even had some students, who are now teachers themselves, ask if they could replicate the event at their schools.

The write-a-thon is a 12-hour event lasting from 9 a.m. to 9 p.m. in the Council Courtyard. It is held each year on the last Wednesday in October. Registration opened Oct. 11, and this year’s event will be held Oct. 27, 2021. Once the clock strikes 9 p.m. on that date, the stories will be closed. They are then given to the literary club to edit and eventually return to Duke, so the writers can read the end result. What that result will be is anyone’s guess.

In previous years, the Ghost of JU has played soccer and run track. It has contemplated the meaning of life over coffee. It has made itself at home on campus and become part of the fabric of fall. Against a backdrop of pumpkins and costume parades, it has brought the joy of writing to this harvest and Halloween season, and Duke and her many write-a-thon contributors wouldn’t have it any other way.

For more information about the Ghost of JU Write-a-thon or to register, please contact Dr. Connie Duke at cduke1@ju.edu.