Home » Topics » Education » From Our Home to Yours: Reflections from the Cost Family 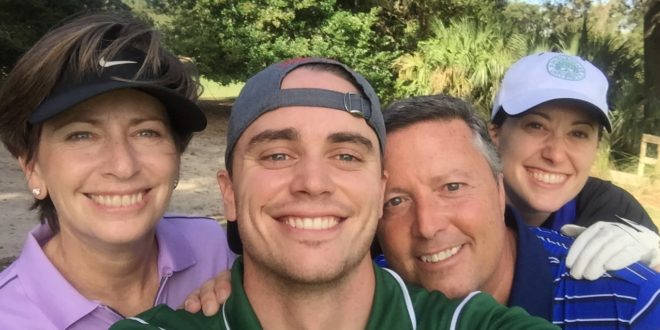 From Our Home to Yours: Reflections from the Cost Family

As Jacksonville University welcomes families from all across the nation, around the globe, and from right here in Northeast Florida, memories will be made and stories will be told. Homecoming and Family Weekend are times to celebrate, reunite, and remember what “family” really means. President Tim Cost, his wife Stephanie, and his children, Melanie and Drew, share some of their own favorite moments and invite you to relax, laugh, love, and simply enjoy being a part of the JU Family.

For siblings who grew up wearing “Dad’s old baseball shirts” as pajamas, they understand Tim Cost from a decidedly unique perspective. “As far as we knew,” Melanie says, “we were the center of Dad’s life.” Former Director of Corporate Communications at CSX Transportation and now a mother herself, Melanie Cost Young agrees with her brother Drew that Dad practically hung the moon. “He left the house at 4:30 every morning and was home for dinner by 7 P.M. Every day. What he did between those hours was generally lost on us,” Drew says, though Melanie fondly recalls one important feature of her father’s New York City corner office. “He had a TV, and we thought he got to watch cartoons all day.”

Stephanie explains how humility was constantly modeled at home and that Tim’s business acumen and other accomplishments dawned on each of the children in time and at their own pace. Melanie says, “Once I entered the working world, I realized what incredible sacrifices Dad made to be so present in our lives–taking the train from Philadelphia to Manhattan and back every day—so we didn’t have to move or change schools.”

Naturally, there were some uncommon aspects to growing up in the home of a respected mergers and acquisitions expert and a talented, professional mother—chiefly, what the siblings call the “economics lecture” at the dinner table. “Economics explains the world” was an oft repeated family phrase. Melanie laughs about her memory of Parents Day at her elementary school. Her father was invited to speak to the class. “Dad offered a popular kid named Mike the choice between a 100 GRAND bar and a stock certificate. Being 10 years old, Mike chose the candy bar, which gave Dad the opening to explain how stocks can appreciate over time and eventually earn an investor an actual $100,000.”

Drew also experienced his share of lessons in supply and demand. “I came home from school one day with a Charizard Pokemon card, and yes, for a brief period, I was caught up in the fad. I said, ‘Dad, this thing is worth $60!’ To me, that was like a million dollars. Dad chuckled and said, ‘Interesting, son. And can you find someone willing to pay you $60 for it?’ My mind exploded. Of course, I couldn’t. No one my age had $60 and no one with any money cared about Pokemon cards.”

Now, as President of his alma mater and after a highly regarded corporate career in some of America’s top companies, Tim Cost knows what it feels like to be on the “other side of the table” when it came to Melanie and Drew searching for a college home. “My parents were notorious for trying to let me and Drew be independent in our college decision-making, and to this day we joke about the fact that on campus tours, they encouraged me to walk up front to better hear the tour guide while they hung in the back being inconspicuous.” In 2008, Melanie graduated summa cum laude from Wake Forest University with a major in economics and minor in global trade and commerce. From there, she worked in strategic communications at the consulting firm APCO Worldwide in Washington, D.C., later making the move to Jacksonville and CSX. 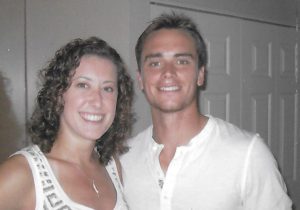 “My college search was a little different,” Drew says of his soccer recruitment days during sophomore and junior year. “At that point, Dad was at ARAMARK in the midst of taking a $10 billion company private, which is an incredibly involved and time-consuming maneuver, involving a multitude of lawyers, banks, and executives sorting through billions of dollars of debt. I visited over 20 schools. Dad only missed one visit throughout the whole process,” Drew says proudly. “The fact that he was there along the way made all the difference because he knew me. He knew the schools and he knew what would fit. As a result, he now has a whole closet full of Nittany Lion gear” and Drew has a BS in Economics from the Penn State University Smeal College of Business. He has also been in sales at PepsiCo for more than four years, specializing in the area of eCommerce and representing its North America Nutrition portfolio that consists of products under the Gatorade, Tropicana, and Quaker brands.

As hard as every member of the Cost family works in school, at home, or at the office, there is always time set aside for fun. “People who know Tim well love his zest for living,” Stephanie says. “Throughout our lives, he has made just about everything fun. He truly is a positive guy who looks on the bright side.”

One of those bright and shining moments, in Melanie’s memory, was a certain visit to Tower Theatre in Philadelphia. “One of my favorite concert memories is going to see Steely Dan when I was in college,” she says. “It’s an old theater with close to a hundred steps to get to the balcony. I’d recently had ankle surgery and was sporting crutches. Somehow, the theater had escaped ADA compliance and had no elevator. So Dad carried me on his back, up every single step, and then back down again after the concert.”

Avid movie watchers as well, they all agree that Groundhog Day was required viewing growing up. “My Dad loves movies, which means I can quote scenes from movies I’ve never seen,” Melanie says. Christopher Nolan’s Sci-Fi thriller Inception stands out in Drew’s mind. “We watched that together and paused it about a hundred times trying to understand what was happening. To stump four relatively intelligent people with a movie plot is impressive– nothing like some healthy family debate over which of Leonardo DiCaprio’s dreams we were currently experiencing.”

“After having known each other 40 years, and married for 35, I’ll just add that Tim loves the exchange of ideas more than anyone I know. Many of our family traditions and memories are less about what we did together and more about simply being together,” Stephanie says. In her current role as First Lady, chief cheerleader, and a true ambassador for Jacksonville University, she says that she has the recurring privilege of watching her husband interact with students and their families. Stephanie, along with the rest of the family, is a firm believer in the power of relationships.

“Now, I sometimes see people that sacrifice relationships in order to advance their careers,” Drew says. “The beauty of Tim Cost was that whatever happened, he would not compromise family for anything.” It is this solid commitment to family that every member of the Cost family celebrates, not just during Homecoming weekend, but all year long. From home and heart, they commend each JU family making their student a priority this week.