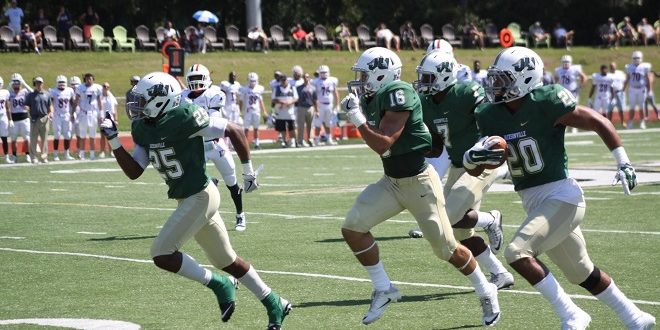 “Be positive. Be passionate. Be proud to be an Eagle.”

That’s the official school motto of Marjory Stoneman Douglas (MSD) High School, where Jacksonville University (JU) alumnus Gabe Stewart (‘16) coached. But the mantra 23-year old Stewart carried —literally stamped across his chest— into one of America’s most iconic tests of survival and athleticism was #MSDStrong.

On June 13, he appeared in the tenth season of “American Ninja Warrior.” Only one of many experiences he will never forget.

Stewart entered Huntingtown High School in Maryland in 2008. “My freshman year, I was on my own. My mother was struggling with an addiction and was no longer in the picture.”

Staying with friends, moving from place to place, with no home to call his own, he says that football, basketball, and track were what kept him “on track” and in school during those difficult years. By his sophomore year, Stewart was playing varsity football, what he considered a real turning point.

“I fell in love with football. In 2009, we made it to the Maryland 4A State Championship and played in the Baltimore Raven Stadium.” He’s a diehard Ravens fan and lists the experience among his fondest memories during a time when he rarely knew where he would sleep or find his next meal.

As a junior, and still without a permanent residence, Stewart made a connection with a family who offered him a place to finally call home. “The Morehead-Yost family are the kindest people I have ever known,” he says. By senior year, his excellence on the field landed him a place on the Maryland All-State Team and an opportunity to practice at the University of Maryland and benefit from collegiate-level coaching.

“I graduated Huntingtown in 2012, though I never really thought I would earn a high school diploma, given my circumstances.”

Through a series of re-connections and introductions, Stewart entered Shepherd University as a preferred walk-on. Though his freshman year led to making travel squad, he made the hard decision to relocate to Florida with his adoptive family. 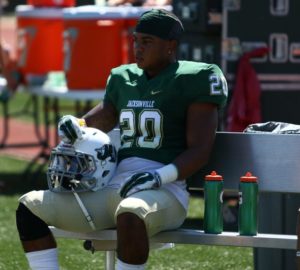 “It was always my dream to be a D1 athlete, and I can’t imagine a better experience than the one I had with JU’s football program,” Stewart says. Though a stranger—new to the city, the state, and the University—Stewart says JU embraced him. “My high school was hundreds of miles away, nobody knew me, and still they accepted me. I found lifelong mentors in the coaches at JU, friendships in my teammates, and some amazing professors.

One faculty member who offered continual encouragement is Assistant Professor of Sociology Shelley Grant. Stewart says she was a critical part of securing a job with Communities In Schools (CIS) following graduation. “JU shaped me into the person I am today and gave me the tools to really succeed.”

“JU shaped me into the person I am today.”

Stewart graduated in December 2016 with a Bachelor of Science in Social Science and a minor in Coaching. His first position at West Jacksonville Middle School was followed by his acceptance of a position at MSD. There he taught world history and coached junior varsity basketball, track and field, and football.

On February 14, 2018, Stewart reported to the MSD campus just like every other day.

“It was a normal day. I had three periods of teaching, and the fourth was planning,” he says. School staff had been notified that a “code red” active shooter drill would take place in the coming weeks, but no one knew exactly when. As the school day progressed, a fire drill sounded and everyone went through the motions.

After eating lunch and prepping a track and field schedule, Stewart visited a neighboring classroom, checking on one of his student athletes. Fifteen minutes later the fire alarm sounded again.

While students proceeded to fire drill stations, again, teachers wondered if it was actually the active-shooter drill. Then the first gunshot rang out.

“Once we heard multiple shots, we knew it wasn’t a drill.”

Pressing students back into the classroom and directing others to return to a room and clear the hall, Stewart combed the surrounding area. Teachers had initiated code red protocol, doors were locked, and a group of about 20 students was left stranded in the open.

Stewart hid the group as best he could, moving them around a corner and flat against a wall, and then returned to the locked classrooms for help. “I ran up and down, flashing my badge, to get someone to open a door. Eventually, one teacher did.”

Once that group had safely joined the others, Stewart returned to that neighboring classroom. He waited nearly three hours with his students until SWAT teams cleared the campus.

“I think the values I learned, and now teach, through sports applied to the events at MSD—most importantly, the way we as a community came together following the tragedy. Teachers, students, our teams, the District all came together to help and to take care of each other. That’s what #MSDStrong is all about.”

Warrior J.J. Woods took on his training. Soon, Stewart discovered the unique challenges this competition posed for him as a former college athlete. “It’s not about muscling your way through,” he told reporters prior to the Miami episode airing. “It’s about using your momentum.”

With only three weeks to train, and competing against 100 other contestants, he raced for the opportunity to appear on national television and reach for the coveted $1 million prize. Though for Stewart, the ultimate prize had nothing to do with dollar signs.

“I want to see my students smile again, give them something to be happy about and look forward to,” he repeatedly told reporters, and smiles were everywhere at viewing parties hosted by MSD on June 13.

“If they give me a call in future, I would love to return,” Stewart said of his Warrior experience.

Most recently, Stewart accepted a teaching and coaching position at Thomas Stone High School in Maryland, back in his hometown.

“February 14 was an eye-opening experience. I had this gut feeling that I needed to return to the community where I grew up, give back to the schools there, and help kids like me.”

His advice to current JU students, or anyone considering teaching as a career: love kids, first and foremost. Stewart says that you can be as educated and well-informed as you like, but without a passion for putting kids first, none of that will matter.

He feels the need for role models, coaches, and teachers in Southern Maryland. Perhaps more deeply than most, given his humble start. But he holds out hope for happier days, both at Stone and in Parkland, where he will visit soon and often. “I will never forget MSD and will always have the Eagles in my heart,” Stewart says.

“You can’t do anything on your own—you need a team supporting you. That translates into life after football, after high school, after college, into the day-to-day successes and challenges of life. We all need a support system.”