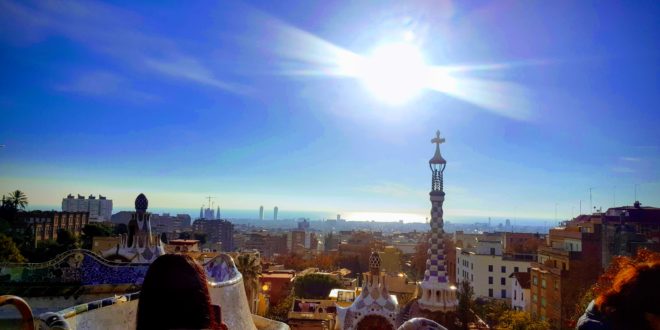 The view from high atop Park Güell, one of the major works of Spanish artist Gaudí in Barcelona.

International Business major Avery Thompson has a passion for the cultures and business practices of other countries. Since arriving at Jacksonville University (JU), the Charleston-bred student-athlete has studied twice in Scotland and more recently in Barcelona. Spending four months in Spain, he said, has left an imprint on his life. It also provided many unforgettable experiences.

Coming from a household where both parents work in public education, Thompson knew the importance of a college degree. “That had a big impact on me growing up. I take education extremely seriously. Not going to college was never an option,” he said.

College-ready and craving knowledge, he traveled to Scotland in the fall of 2017.

In preparation for the Barcelona experience, Thompson pushed himself to learn Spanish. Now, he minors in Spanish and plans to be fluent by his graduation in 2020. While abroad, he learned by watching the news and living with people who didn’t speak English. “It was almost like I was a little kid again. Saying whatever I heard really quickened the process,” Thompson said.

Learning a new language in an unfamiliar city wasn’t without challenges. One of the native languages to Spain is Catalan, which is completely different from the Spanish language taught in American schools. “Immediately, out of the airport, I was confused and didn’t know how to get into the city,” he said. “My flight was delayed, I had no help, And I questioned if I was doing the right thing.”

Thanks to new friends like Jordi and Alessio—a national fluent in Spanish, Italian, and English—Thompson had the support he needed to get accustomed to his temporary home.

“There are a million different ways to live life.”

He also credits his professors abroad for his success. In all of his classes, the professors only spoke Spanish. “It helped me adapt really early on,” said Thompson. “Even if I didn’t understand fully, I got the gist. Certain words I understood and could just put the rest together.”

The Why and How

Thompson encourages other JU students to study abroad and discover learning in different environments. He believes it important to travel and experience other cultures. “People should become more open and accepting. There are a million different ways to live life.”

Even though Thompson didn’t rely on financial aid for his Barcelona experience, he understands this may be a dealbreaker for other students. This is why he now works with the Study Abroad and Away program at JU to help find scholarships for students wanting to go abroad. He recommends www.goabroad.com/scholarships-abroad as a top site as a financial support resource.

“People feel like it is impossible, but it’s really not,” Thompson said. “If I can do it, anybody can do it. Trust me.”