Home » All Sections » From 5,000 meters to the Big Four: Alumna crosses the finish line with a job in tow 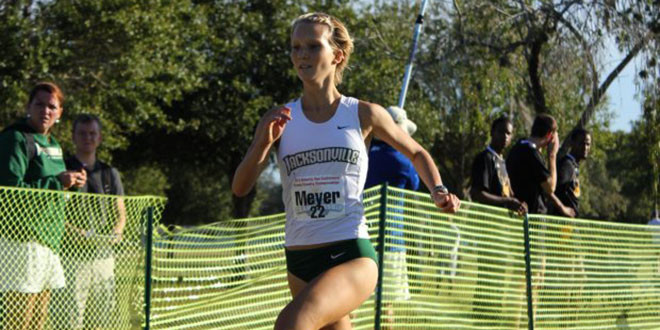 From 5,000 meters to the Big Four: Alumna crosses the finish line with a job in tow

Svenja Meyer, a class of 2014 alumna, had yet to receive her undergraduate degree from Jacksonville University, when she knew she had a full-time job with a Big Four accounting firm waiting.

While she was still earning athletic accolades for the University – most recently helping her teammates to JU’s ninth straight Atlantic Sun Indoor Track & Field title in February – Meyer began job searching during cross-country season. She said she recognizes the role being a student-athlete has played in helping her focus and time-manage her job search.

Being a student-athlete has definitely helped me in the recruiting process. I learned that the most important part of the interviews was to be personable and tell a story that is memorable,”

said Meyer, who is from Appen, Germany. “My personal story is all about being a German distance runner at JU with a 3.91 GPA logging up to 80 miles per week while taking 18-21 credits a semester and also working in the tutoring center.”

Big Four accounting firms begin typically begin recruiting a year ahead of the job start date, but ultimately, the International Business and Accounting major was pursued by Ernst & Young, PricewaterhouseCoopers, and Deloitte.

“In the end, I decided to sign with Ernst & Young, even though it was a very tough decision for me,” she said. “It is a great feeling to know I am set for my life after college ahead of time.”

In addition to her career pursuits, Meyer has kept busy on the track as well. She was named to the 2014 Women’s Indoor Track & Field Academic All-Conference Team in March, and set new JU records in the 3,000-meter run (9:51.58) at the Samford Invitational Feb. 8 and in the 5,000-meter run (17:18.12) at the Atlantic Sun Indoor Championships Feb. 22. She garnered 14 total team points at the A-Sun Indoor Championships.

“We also worked hard in practice the last couple of weeks to keep this momentum going for outdoors,” she said. “Being recognized for my work in the classroom is the icing on the cake.”