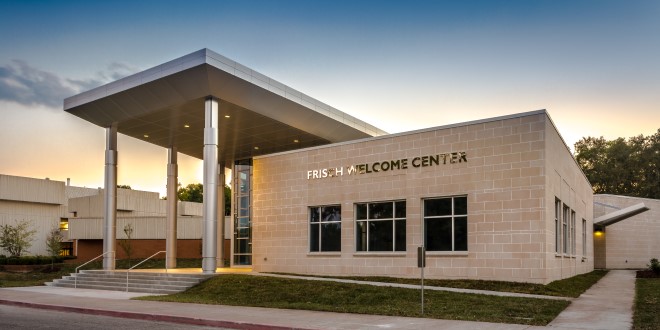 Four generations of the Frisch family gathered on a sunny April afternoon to mark an historic moment at Jacksonville University: the official opening of a new building that bears the Frisch name and stands as a shining symbol of the University’s bright future.

With the press of a button, the doors of the new Frisch Family Welcome Center opened to an eager crowd of JU faculty, staff, students, and supporters ready to behold for the first time its sleek design and inviting interior spaces.

“To thousands of prospective students and parents, first impressions matter,” said Jacksonville University President Tim Cost ‘81. “The Frisch Welcome Center transforms their first impression of campus and sends a clear message that we are an innovative, modern, student-focused institution. This is a pivotal milestone in the growth of this University that will drive us forward in our mission to attract and graduate talented, exceptional students.”

Each year, the University welcomes thousands of visitors and honored guests who come from across the country and around the globe to explore Jacksonville and JU’s iconic, tree-lined campus. Many are high school students searching for a college fit. The new 11,750 square-foot Welcome Center enables the University to put its best foot forward to prospective families.

“This facility represents what vision and philanthropy can make possible. We are so grateful to these transformational donors and investors,” said Senior Vice President of University Advancement Kimberly Jones.

Design and construction of the $4.5 million building was made possible by several significant multi-year investments from major supporters, including Preston and Joan Haskell, Chancellor Emerita Dr. Frances Bartlett Kinne, and, the building’s namesake, the Frisch family-owned-and-operated Beaver Street Fisheries, which gave to the project through the company’s philanthropic arm, Beaver Street Foundation.

Beaver Street Fisheries Founder and Chairman Harry Frisch, 95, stood with the rest of the Frisch family to humbly thank JU for the honor of naming the building. Grandson Mark Frisch now runs the family business and noted that the Welcome Center began as a vision for the future that President Cost shared with him a few years ago.

“I bought into that vision,” said Frisch, former JU trustee and executive vice president of Beaver Street Fisheries. “Many fantastic students for years to come will walk through these doors to an institution they’ll call home for four years, and if they’re smart, longer than four years.”

Centrally located between the Howard Administration Building and the Gooding Building, the Frisch Welcome Center is easily seen upon entering the main gates of campus. It’s also steps away from the historic Founders Building where the University’s legacy began 85 years ago.

“This building will bring together so many people,” said Haskell. “Until a year ago, there was no single, obvious place where one could be welcomed or receive instructions or information. This fills that void. It serves a purpose and tells a story. A symbol of Jacksonville University.”

From the very beginning of the project, President Cost knew Haskell was the right firm to design and build the Welcome Center.

“When we had the idea for a welcome center, we went to Preston and his team,” Cost said. “They produced design after design, and then Preston went a step further. He personally and substantially invested.”

Dr. Kinne, the iconic former President of JU who ushered in unprecedented growth at the University, also contributed to the project. The Kinne Welcome Gallery, located across from the central registration desk in the lobby, provides visitors a welcoming space to socialize and enjoy refreshments.

Just days shy of her 102nd birthday, the cheerful and energetic Kinne provided a moment of comic relief for the crowd while thanking the University for inviting her to be part of the project. “For us, it is a historical day and I’m happy to be here, but then, I’m happy to be anywhere,” said Kinne, as the crowd laughed.

Minutes later, supporters sipped refreshments and toured the facility, reflecting on the significance of the moment—a moment when the University embarked on a new chapter of exciting growth and unencumbered opportunities. And how fitting for this next chapter to begin just as the largest graduating class in school history prepares to walk the stage during 2019 Commencement ceremonies—all signs that momentum is skyrocketing and JU’s promising trajectory is unstoppable.