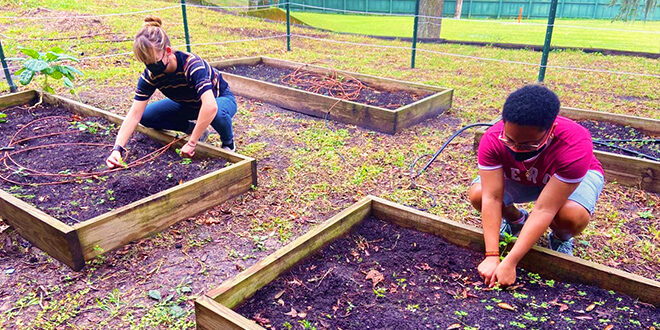 These annual awards were created to support student initiatives that explore French and Francophone (French-speaking) culture in new and creative ways. The awards are intended to help student organizations lead major France-related projects on their campuses by providing a unique combination of funding and mentoring. With this support, awardees are expected to showcase French and Francophone culture to new audiences on their campuses and beyond.

Le Cercle Francophone was awarded first prize for a proposal called “A French Potager in Jacksonville,” and the club will work with the Gardening Club to transform the existing Healthy Campus Garden, located behind the Swisher Library, into a French kitchen garden. Suggested by assistant professor of French and LCF faculty advisor Tamara Caudill, the award-winning proposal was written by LCF president Alessandra Ravelo. The resulting project will feature French flowers and herbs, a Zoom workshop led by a French gardening expert, and other French elements.

“The idea for this project came from seniors Armany LeBlanc and Elizabeth Florida, who have worked so hard on the Healthy Campus Garden. Since both are graduating in the spring, the hope was to try to find funds and labor to revitalize it. From there, I suggested a jardin potager, or French kitchen garden, which ties in perfectly with the goals of the France on Campus Award,” Caudill said.

Additional collaboration on this project was supplied by Nisse Goldberg, professor of biology and marine science and Gardening Club advisor.

According to Caudill, the garden will embody French culture and will tie into the university’s French curriculum. “Seeing as the French like to marry practicality with beauty, a jardin potager will include more decorative elements like flowers and herbs, alongside heirloom vegetables, grown in attractive patterns. Currently, the beds are mostly bare for winter.”

In terms of curriculum, the garden will be incorporated into Jacksonville University’s intermediate French II (FREN202) course. The course is centered around the study of the classic novella “Le Petit Prince” by Antoine de Saint-Exupéry. With its important subplot of the prince’s devotion to his beautiful rose, the gardening motif is a natural addition.