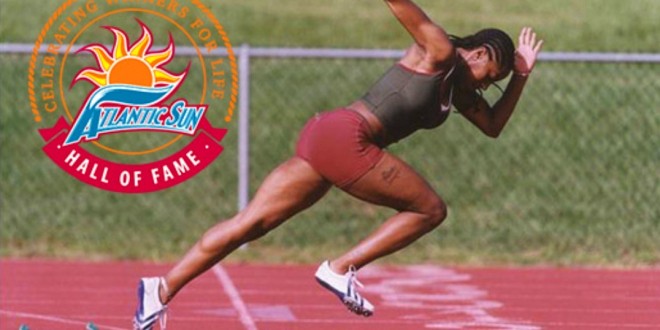 Tubbs was the first track and field student-athlete that Head Coach Ron Grigg recruited when he began his coaching career at Jacksonville. Twenty A-Sun Indoor and Outdoor Championships later, what followed was the development of the JU program and an expectation of excellence that clearly began with Tubbs’ influence on and off the track.

With a bevy of program firsts that included racing to the top mark in the 2001 NCAA National Championship in the Indoor 60m (7.29) as a sophomore, “firsts” and Monique Tubbs became synonymous. That effort helped Tubbs become JU’s first female NCAA Champion and by the end of her career she had also become the program’s only four-time All-America honoree. She became the only A-Sun female track and field athlete to win the outdoor 100 meters three times and is the only female in conference history to win both the 100 & 200 meters in the same championship meet twice. With victories in the 200 meters in 2000 and 2003, she is one of only two female student-athletes to claim that title on two separate occasions.

Also a JU and Massachusetts State Track Coaches Association Hall of Famer, Tubbs turned down offers to remain in track and field after graduation in order to focus on her career in business for which she had prepared for as a student-athlete. Employed by Ally Financial as a manager for operational governance and assurance, she resides in Jacksonville and has even continued to help shape the future of the university by serving a term as a member of the JU Board of Trustees.
“Monique Tubbs is one of those rare people and athletes that come along much too infrequently,” JU Chief Athletics Officer/Athletic Director Dr. Donnie Horner said. “She was not only a standout on the track but has been a standout in her career and we are proud to call her one of our own.”
An eight-member Hall of Fame Committee representing each of the A-Sun’s member institutions selected its Class of 2015 from a list of 19 nominees. The A-Sun Hall of Fame was created to annually honor former student-athletes, coaches, administrators and others whose collective accomplishments have contributed to the conference’s successful achievement of its mission of Building Winners for Life.
Representing former and current members of the conference from five different sports, the A-Sun Hall of Fame inaugural class will be inducted in October at the Tampa Marriott Waterside Hotel & Marina in Tampa, Fla. The ceremony will be emceed by veteran broadcaster Neil Solondz, a member of the Tampa Bay Rays broadcast crew and an A-Sun Championship play-by-play announcer.
“This is an historic time in the life of the Atlantic Sun Conference, and we are so excited about introducing the inaugural class of A-Sun Hall of Famers,” said A-Sun Commissioner Ted Gumbart. “From the exceptional success enjoyed in competition to the impact that each has made off the field in varying arenas of life, this class epitomizes the A-Sun mission of Building Winners for Life.”
The other inductees include: Andrea Congreaves (Mercer), Corey Kluber (Stetson), Chris Sale (Florida Gulf Coast), Hal Sutton (Centenary College) and Glenn Wilkes, Sr. (Stetson).