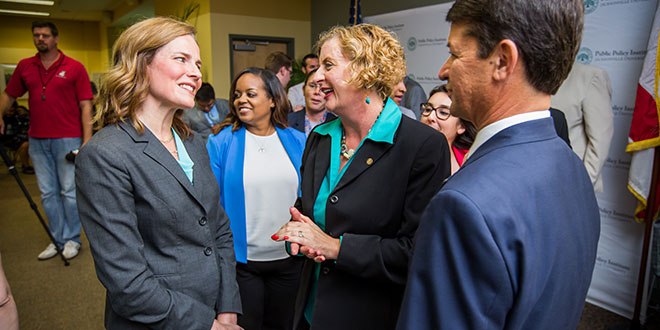 In its six-year history, the Jacksonville University Public Policy Institute (The Institute) has hosted numerous policymakers, civic leaders, elected officials, and visionaries on the national stage and locally. One former Hesburgh Lecture speaker proved no exception. 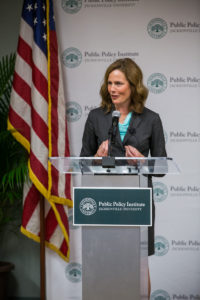 Then Notre Dame law professor Amy Coney Barrett gave a timely talk just days before the 2016 presidential election on the role of the U.S. Supreme Court, as well as its future.

Now, Barrett is a front-runner for retiring Associate Justice Anthony Kennedy’s seat on the High Court. In her remarks to the JU community in 2016, Barrett said that a Supreme Court Justice is someone who “applies the law, follows the law where it goes, and doesn’t decide simply on the basis of partisan preference.” She was appointed by President Donald Trump to the U.S. Court of Appeals for the Seventh Circuit in October 2017, and the Institute has followed her career with great interest.

During her 2016 visit to Jacksonville University, Barrett addressed how judges make decisions, the role of the Court, and its future, and students attending the annual lecture weighed in on those thoughts during a post-discussion Q&A.

At 46 years old, Judge Barrett is the youngest of President Trump’s lead contenders, and if chosen has the potential to serve on the Supreme Court for several decades.

Institute Director Rick Mullaney said, “Hosting impactful leaders like Judge Barrett is what sets the Institute apart as a neutral gathering place for public policy discussion, education, and debate.” Mullaney provided commentary on News4JAX this past week regarding the possible trajectory of the Court.

Mullaney also says court-watchers are sensitive to the fact that Barrett is no stranger to controversy and that her Senate confirmation hearing included high-profile questioning on her personal faith by Senators Feinstein, Durban, and Franken and the role it could play as a judge. He says she will be popular with Trump’s Republican base but sure to face opposition from Democrats on Roe v. Wade (1973) issues.

Many agree that a woman would be a welcome choice, though accurately predicting President Trump’s decision, expected on Monday, is something few have attempted. If selected, Barrett would become the fifth woman to take the bench and only the second appointed by a Republican president. Of the three women currently serving, she would be the only “originalist” after the Scalia mold.

Regardless of the outcome of the hotly debated nominations, the Institute hopes that its student body, which is currently 52 percent women, will find Barrett’s journey both inspiring and informative as they pursue a wide range of careers within the public, private, corporate, education, and nonprofit sectors.

The Institute’s Annual Hesburgh Lecture is provided in partnership with the Notre Dame Club of Greater Jacksonville. For more information on the Institute and the only Master of Public Policy degree program in the state of Florida, please visit ju.edu/publicpolicy, where you can also find the latest on JU hosting upcoming debates in the race to the Florida Governor’s Office.