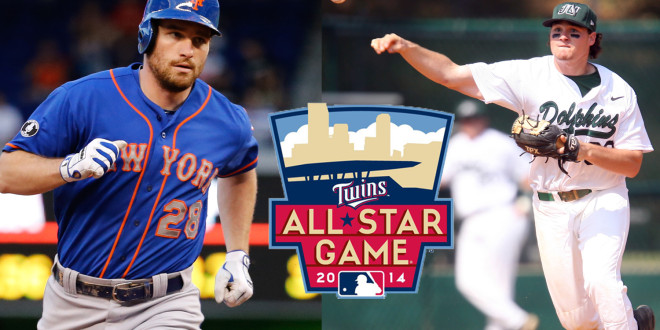 Former Jacksonville University standout Daniel Murphy continues to represent the Dolphins at the highest level as the New York Met second baseman was selected to compete in the 2014 Major League Baseball All-Star game. Murphy will serve as a reserve second baseman for the National League team in the July 15 game at Target Field.

As of July 7 Murphy, who was the 2006 Atlantic Sun Player of the Year at JU, was tied for second in the National League with 106 hits and was 14th with a .294 average. He also ranked top 10 in the NL with 52 runs scored. A Jacksonville, Fla. native, he played three seasons for JU leading the program to a NCAA Regional appearance before being selected in the 13th round of the 2006 MLB First Year Player Draft.

“My immediate reaction would probably be shock,” said Murphy of his selection in an article by Anthony DiComo for MLB.com. “It’s a blessing. I don’t work any harder on this ballclub than anyone else does. There’s no doubt about that. There’s 24 men in here who work really hard. It’s just an honor. It’s humbling. It’s a fantastic blessing.”

The 85th All-Star Game will be televised nationally by FOX, in Canada by Rogers Sportsnet and RDS, and worldwide by partners in more than 200 countries via MLB International’s independent feed. ESPN Radio and ESPN Radio Deportes will provide national radio coverage of the All-Star Game. MLB Network and SiriusXM will also provide comprehensive All-Star Week coverage. For more information, visit allstargame.com.