Home » All Sections » Florida should be seen as a gateway to success and innovation, Agriculture Commissioner Adam Putnam tells JU PPI board 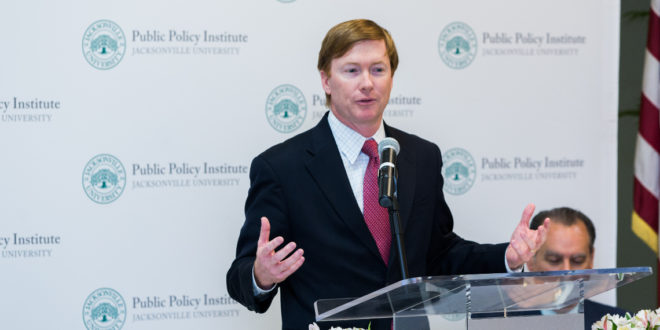 Florida should be seen as a gateway to success and innovation, Agriculture Commissioner Adam Putnam tells JU PPI board

Issues key to making Florida a player in the global job market – economics, water, education and healthcare – were the focus of an address by Florida Commissioner of Agriculture Adam Putnam when he visited with Jacksonville University’s Public Policy Institute Board of Advisors, students, faculty and guests on April 21. People from all over the world dream of coming to Florida, Putnam said. It’s the prize they give themselves for a life well lived. When they move here, they are not thinking about how to fix the St. Johns River or the highways, the Everglades, or the education system, he added. They expect Florida to be what they imagined, and that someone else will address the problems.

Instead of a prize, Florida should be a gateway, Putnam said: a state where people who would retire here actually move here decades sooner, raise children and build lives. That will create a population of innovators who invest in long-term issues, he said.

Prior to being elected Commissioner of Agriculture in 2010, Putnam served 10 years as a U.S. Congressman, representing the 12th district of Florida. He was elected by his peers to represent all Republican members of the House of Representatives as Chairman of the House Republican Conference, the third-highest ranking position in Congress and the highest level position held by any Floridian in Congress.

Before joining Congress, Putnam served as member of the Florida House of Representatives, first elected at age 22. Adam was appointed Chairman of the House Agriculture Committee, where he provided leadership on the many issues facing Florida’s dynamic agriculture industry, including property rights, water and the Everglades. Adam is a fifth-generation cattle rancher and citrus grower from Polk County. He is a graduate of the University of Florida, with a Bachelor of Science in Food and Resource Economics. Putnam and his wife, Melissa, have four children and live in Bartow.

The Jacksonville University Public Policy Institute is a neutral gathering place to discuss policy matters affecting our state and community. Offering the only Master in Public Policy degree in Florida, the Institute prepares students for leadership and diverse career opportunities in the public, private and non-profit sectors. The Institute’s 25-member, nonpartisan Board of Advisors is a diverse cross section of some of Florida’s most respected and successful business, civic, and community leaders in education, finance, banking, public infrastructure, healthcare, law, and transportation. More information is at ju.edu/ppi.