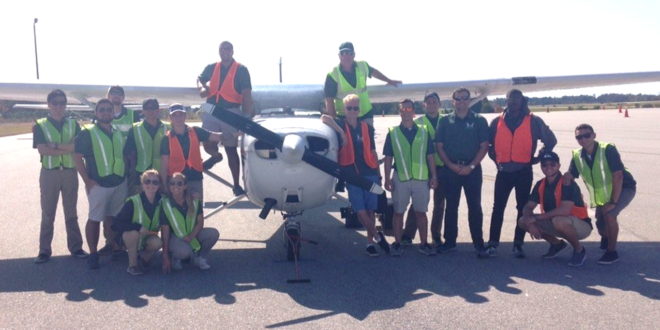 The Flight Team is back from Auburn, Ala., after going head-to-head with some of the nation’s top flight programs in the Region IX National Intercollegiate Flying Association’s (NIFA) Safety and Flight Evaluation Conference (SAFECON).

In only the second time in the School of Aviation‘s history, the Flight Team received the prestigious “Spirit of Excellence Award.” The award is given in recognition of aeronautical knowledge in the pursuit of flight safety excellence.

The award, given by The Society of Experimental Test Pilot Foundation, honors the team’s performance, the coach’s and University’s commitment to Aeronautical Programs and the team’s dedication to excel during the NIFA regional competition.

“The team’s success is the result of the hard work and dedication of team members and the dedication of the team advisors,” said Capt. Matt Tuohy, Director of the School of Aviation. “Their success also speaks volumes for the quality of the flight training that students receive at JU through L3 Airline Academy. The JU Flight Team is grateful for the support given by Jacksonville University and L3 Airline Academy.”

The JU School of Aviation in the Davis College of Business has been educating and training future professional pilots and aviation executives for more than 30 years. In 1996, JU established a one-of-a-kind training partnership with an airline’s training center, L3 Airline Academy (formerly Aerosim Flight Academy), to educate and train future airline pilots. JU is one of the first 30 universities in the world with bachelor degree programs accredited by the Aviation Accreditation Board International (AABI), and one of 36 universities in the U.S. selected by the Federal Aviation Administration to offer an Air Traffic Control Program under the FAA’s collegiate training initiative (CTI).