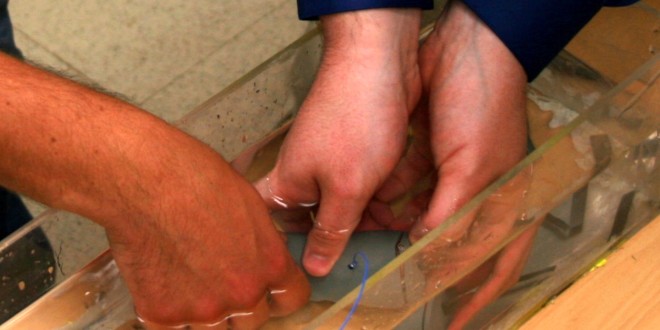 A fish robot prototype being built as part of the JU Engineering Program. The robot will eventually have sensors, a data acquisition card and a GPS tracker to help in the study of the St. Johns River. 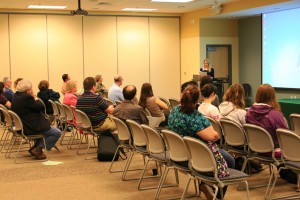 The free symposium (@JUSymposium and #JUSymp2015), which runs from 8 a.m. to 5 p.m. each day in the JU Davis College of Business Conference Rooms B and C, spotlights the excellence of JU students and faculty who engage in cutting-edge research in intriguing topics across a range of disciplines (see a .pdf of the full schedule here).

Students and the community can stop by DCOB any time during the event and learn about JU’s exciting research, teaching, service, study abroad and internships, said Dr. Brian Lane, Chair of the Symposium Committee.

“The Symposium is always an amazing event in which the entire campus community comes together to share and celebrate each other’s work,” he said. “It’s a true interdisciplinary, liberal arts environment in which students and faculty from every discipline learn from each other.”

Many of the presentations will later be delivered at national conferences such as the National Conference on Undergraduate Research, or lead to papers submitted for publication, so the feedback presenters receive at the Symposium is vital to the further development of their work, he added. 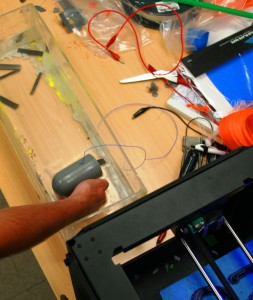 “For many students, their Symposium presentations show the culmination of months or years of hard work becoming well-rounded professionals in their fields. For the faculty, it’s a chance to present their own varied interests and reconnect with each other during a busy time of the academic year.”

Another great feature of the Symposium is that professors and students present side by side, sometimes even co-presenting, Lane noted.