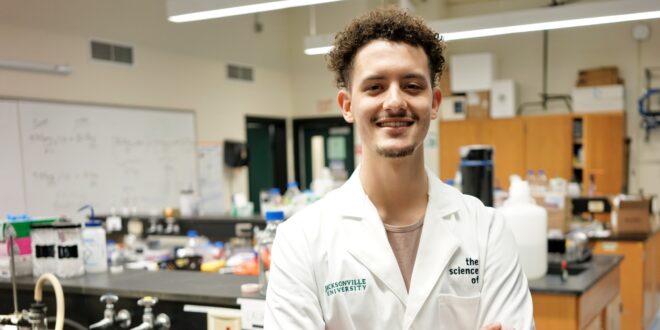 First-generation college student on his way to becoming a doctor

Antonio Espinoza ‘21 didn’t stop at being the first in his family to graduate college. Less than a year later, he was also accepted to medical school, taking the first step toward his dream of becoming a physician.

So far, the Jacksonville University chemistry alumnus has been accepted to the University of Connecticut, one of the top medical schools in the country. He’s awaiting decisions from four more schools.

“Graduating from JU as a first-generation student felt like I was triumphant in overcoming numerous challenges and breaking several glass ceilings,” he said. “As a college graduate, I can be confident in my future and ability.”

While he hasn’t settled on a specialty, growing up in West Virginia exposed him to systemic problems within healthcare that he hopes to help solve.

“Growing up in West Virginia and being the son of veteran parents has exposed me to patient populations that tend to fall through the cracks of our healthcare system,” Espinoza said. “In rural healthcare, as in most areas of West Virginia,  hospitals are under-resourced and ill-equipped to deal with complex cases resulting in increased burden on patients. Similar difficulties exist in the Veterans Affairs hospitals.”

As a student, Espinoza said his extracurricular and campus involvement played a significant role in his medical school acceptance.

He helped found three groups on campus – the Residence Hall Association, Colleges Against Cancer and the Chemistry Society – and held leadership roles in each. An active member in the Student Government Association, Espinoza served as the Arts and Sciences Senator and Chief of Staff.

“I believe the plentiful opportunities to be involved on campus and the small class sizes were a tremendous opportunity to increase my competitiveness and core competencies for medical school,” he said. “I was able to help found multiple organizations and be involved in others contributing to my ability as a leader and future leader in medicine.”

The personal, tight-knit feel of the JU community was a reason for his success, Espinoza said. That also means the ability to form connections with faculty.

Frequent encouragement from Associate Professor of Chemistry Dr. Gretchen Bielmyer-Fraser motivated Espinoza to succeed. He also looked to Professor of Biology and Chemistry Dr. Anthony Ouellette as a mentor during his time at JU.

“He mentored me through research and improved my skills in independent lab work,” he said. “With his guidance, I was able to learn the intricacies of being a scientist and gain exposure to unique opportunities in the natural sciences beyond JU’s campus.”

While the journey there wasn’t always easy, Espinoza hopes that as a first-generation college graduate and future doctor he can help others that are in his position do the same.

“I hope the adversity I overcame as a first-generation college student will empower me to advocate for similarly disadvantaged individuals.”