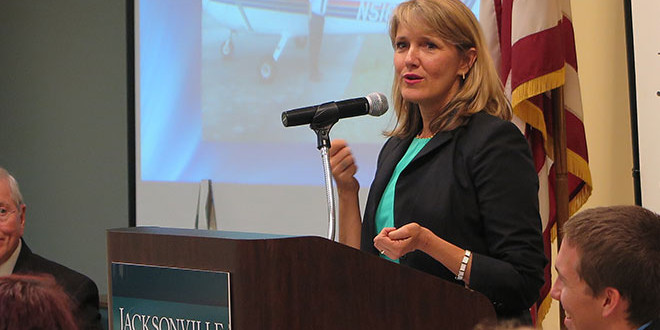 Current students were honored for their hard work and dedication, and graduating seniors were congratulated for their achievements, at the recent annual School of Aviation banquet honoring the past, present and future of the aviation program at Jacksonville University. A moment of silence was also held in remembrance of the founder of the aviation program, Lieutenant Colonel Curtis Truver, who died in November 2014.

The keynote speaker was Kelly Barrera, who was the first female graduate of the Aviation Program in 1986. She currently serves as the District 4 Representative of the St Johns County School District. Barrera has also served as Chairman and Treasurer during her time as an elected public servant of the St. Johns County-St. Augustine Airport Authority.

Following her graduation from JU, Barrera went on to hold positions in business management, training, aviation, safety compliance, and education. She credits her “business mindset” that she gained while receiving her Aviation Management degree within the Davis College of Business. This allowed her to “navigate between industries and take my skills to any position I held, in aviation or not.”

In addition to her professional career, Barrera is a strong believer in volunteering, as she has volunteered on other boards and organizations in St. John’s County including: Community Hospice, the Aerospace Academy at St Augustine High School, Ponte Vedra High School’s Academy of International Business and Marketing, Young Life, the PACT Coalition, Rotary, Leadership St Johns and St. Johns County’s sea turtle patrol.

“Kelly’s career is a perfect example of the benefits of a business-based aviation degree program,” said Capt. Matt Tuohy, the School of Aviation’s Director. “She serves as an inspiration to our current students as to what lies before them.”

Figuerado was honored for her hard work and dedication to the Flight Team, which had its best performance in school history in regionals and will compete in the National Competition in May. She was commended for her contributions to the Flight Team, not as a flying competitor, but as the manager for the team.

“Her desire and enthusiasm was second to none in making the flight team successful,” said Harrison, who is a retired professor at JU and has been involved with the Flight Team since its inception.

About the Jacksonville University School of Aviation

Jacksonville University’s School of Aviation in the Davis College of Business has been preparing students for business careers in the aviation industry for more than 31 years. In 1996, Jacksonville University established a one-of-a-kind training partnership with an airline’s training center, Aerosim Flight Academy (formerly Delta Connection Academy), to educate and train future airline pilots. Jacksonville University is one of the first 30 universities in the world with bachelor degree programs accredited by the Aviation Accreditation Board International (AABI) and one of 36 universities in the U.S. selected by the Federal Aviation Administration to offer an Air Traffic Control Program under the FAA’s collegiate training initiative (CTI). To view pictures and videos from the Flight Team competition, visit us online on Facebook and YouTube. To follow aviation at JU, visit www.ju.edu/aviation or call (904) 256-7895.