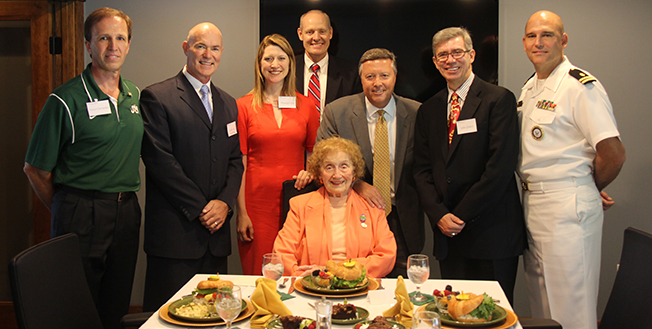 Davis College of Business graduate students with high ambitions, including some from the first Doctor of Business Administration cohort at Jacksonville University, are recipients of this year’s Kinne Merit Scholarships.

The seven honorees, who are pursuing their masters or doctoral degrees, were recognized at a luncheon Friday, Sept. 5. The scholarships were established to recognize top students applying to the DCOB graduate programs to subsidize tuition costs in the first year of their programs. They are awarded annually through the generosity of Dr. Frances Bartlett Kinne, JU past president and chancellor emeritus.

“Fran heard we were turning away some of our best candidates because they lacked the funding or support to continue into an advanced degree,” DCOB Dean, Don Capener, said. “She stepped in with her own resources and is actively soliciting for more,” he added.  “I am grateful for Fran’s generosity and insight to pay it forward. She knows where and how this effort will benefit JU. It is a gift from her heart to future business leaders who she believes will give back to JU.”

The following students are honored as Kinne Scholars for the 2014-15 school year:

Baer received his undergraduate degree in nursing from the Medical University of South Carolina and holds a Master’s Certificate in Project Management from the University of Wisconsin-Madison School of Business. With almost 25 years of service in the U.S. Navy, Baer continues to advance his career as a commissioned officer, with a recent promotion to Lieutenant. Long term, his Executive MBA would give him an opportunity to be promoted to Lieutenant Commander.

Chernyshov received his undergraduate degree in business administration from JU. Chernyshov, who is from Russia, arrived in the United States speaking no English. Currently, he works for Sodexo at Jacksonville University and plans to continue his commitment to JU beyond his graduate studies. This “2012-13 Davis College of Business Student of the Year” prides himself on continuing his business education with hopes of improving his leadership abilities in business and in the classroom. His long-term goals include pursuing a doctorate degree in Business Administration, one of many long term life challenges.

Wendy Gillis has been building robust brands for almost 20 years. She graduated from the University of Pennsylvania with a degree in Psychology and Fine Arts. She later spent time in New York cutting her teeth on brands like Maxwell House coffee, Post cereals, 3M Post-it Notes, and Jergens lotions. Since moving to Jacksonville in 2004, Wendy has continued her work on brands like Johnson & Johnson Vision Care/VISTAKON and the JAX Chamber.  She is Principal of Wendy Gillis Marketing (WGM), a consultancy specializing in marketing strategy and business writing. Wendy earned her MBA from the University of Florida and currently teaches marketing courses at UNF’s Coggin College of Business.

A graduate of the University of North Florida, Jinker achieved his Bachelor’s degree in Transportation & Logistics and Business Administration, followed by his MBA. Jinker has worked at CSX Transportation for almost 20 years, currently serving as the Manager for Price Strategy and Yield Management. He will be a member of the first Doctor of Business Administration cohort this fall. Jinker and his wife hope to move to Southwest China following the completion of this program to open a satellite campus for Webster University. The scholarship would benefit his efforts to achieve his aspirations of giving back to the people of China stemming from teaching at a university in China in 2012.

Liu earned her undergraduate degree in international business and economics from Xiamen University in China. While at Xiamen University, she assisted in creating an organization to help reduce campus waste during her freshman year. This organization continues to improve the global footprint in her community. She was the director of the Student Union for three years and has interned in auditing and economic research. Liu’s long-term goal is to become a professor of accountancy.  She hopes her enrollment in the accelerated MBA program at JU will assist in this endeavor.

McCrary received her Bachelor’s degree from Hampton University and her Graduate degree at Georgia State University, both in accounting. As a certified public accountant, McCrary works with small business owners dealing with the fluctuating economy. McCrary currently teaches at a local technical college with hopes of being an accounting professor at an AACSB accredited university one day. She feels her Doctor of Business Administration studies will assist with her future endeavors. This scholarship will allow for her passion of directing young people to the future of accounting.

Andre van Rensburg graduated from the Executive MBA program from the DCOB at JU in May.  He will be a member of the first Doctor of Business Administration cohort this fall. Born and raised in South Africa, van Rensburg never dreamed of an opportunity to pursue his Doctorate in a subject he is so passionate about. Due to growing state problems in South Africa, van Rensburg was forced to immigrate to the United States prior to the turn of the century. Formerly the CEO of Steer Commercial Realty, a company he created, and current President of a joint venture, Prudential Commercial Real Estate, van Rensburg spends a lot of time traveling and consulting for real estate firms internationally. As a person of many soft skills, he looks forward to the business analytics focus in the Doctor of Business Administration program.