Home » All Sections » Music Prof. Scott Watkins has them standing at Carnegie Hall 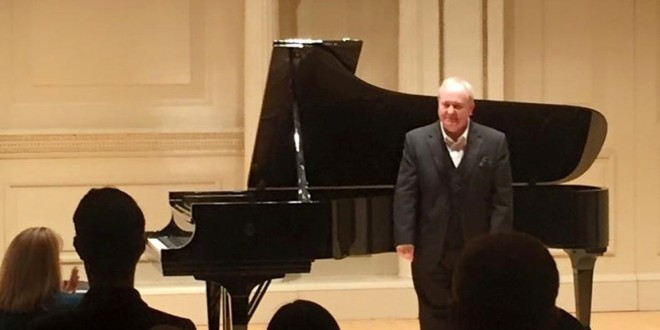 Music Prof. Scott Watkins has them standing at Carnegie Hall

Rorianne Schrade, music critic for New York Concert Review, wrote that Watkins’ program “was well suited to his particular pianistic and musical gifts.” Of the Bartok work she said Watkins “drew upon his laser-like focus, faultless memory, and considerable analytic grasp. It was bold and bracing in its relentless rhythms without ever devolving into the earsplitting harshness that one so often hears in this piece.”

Of the Hanson Sonata, Schrade wrote that Watkins played “with excellent attention to detail and respect for the score [and] with the fidelity of a music historian.” “Debussy’s Préludes Book II were a good match for Mr. Watkins’ gifts. Despite the tendency of many pianists to use the excuse of ‘impressionism’ to run wild and drown some of these 12 pieces in pedal, we know that Debussy was against such abuse, and Mr. Watkins gets it right. He plays with the requisite clarity, but with great sweeps and washes of sound when required. These were excellent performances. There was delicacy in Bruyères and a haunting quality in Feuilles mortes. Mr. Watkins is an undemonstrative player, but the music spoke for itself.”

There were many JU alumni in the large and appreciative audience, which offered a standing ovation.

“I was delighted with the audience and its reception – especially of the Hanson work,” Prof. Watkins said. “It’s an important work, and I’m very proud to have given its New York premiere. I’m equally proud to have represented Jacksonville University on what is perhaps the world’s most prestigious concert stage. And I’m grateful for the support of my colleagues and students at JU. I’m especially grateful for the collaboration with Ginger Sheridan. Having her lend her artistry to this event made it truly special.”

Watkins gave a preview of his New York program in Terry Concert Hall just two days ahead of his Oct. 10 New York appearance, and also gave preview concerts in Ohio, Florida and Texas. Watkins holds a doctorate in Music from Florida State University, and has been at JU’s College of Fine Arts in its Division of Music since 2001.