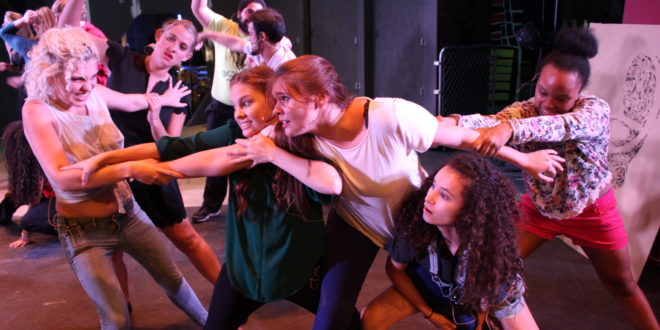 It’s “Urinetown: The Musical,” the Tony Award-winning production being presented Oct. 26-29 in Swisher Theater by the Jacksonville University College of Fine Arts. 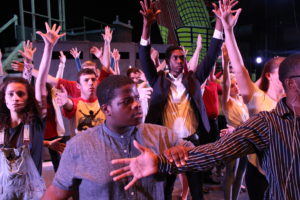 The play is billed as “a hilarious musical satire of the legal system, capitalism, social irresponsibility, populism, bureaucracy, corporate mismanagement, municipal politics and musical theater itself.”

Picture a utility-challenged city, in which the government bans private toilets because of a horrible water shortage. A hero emerges to incite a revolt against the corrupt private company that charges citizens admission to fulfill their most basic human needs.

“It’s a Privilege to Pee,” as one song proclaims.

The New York Times’ original Broadway review called it “hilarious” and “a sensational piece of performance art,” heralding it as a “marvelously self-conscious satire of the musical theater’s social conscience, which focuses equally on human rights and body waste and has steadily gnawed its way from the theater’s sardonic, scofflaw fringe into its most challenging mainstream marketplace.”

“This group of students features some of the most gifted young artists I’ve encountered – the talent in the College of Fine Arts and at JU is through the roof,” DeCicco said. “After losing a week of rehearsal to Hurricane Irma, they have dedicated themselves to delivering the highest quality of show to the campus and community.”

DeCicco noted that the script of Urinetown is demanding and requires discipline and dedication from the actors.

“Each member of the cast has risen marvelously to the occasion, far above and beyond the call of duty.  In addition, the technical design and artistry that has been poured into the production is top-notch.”

The CFA production even had a technical consultant. JU Public Policy Institute MPP students Diana Chestnut and Sabrinna Maples took part in the collaboration, creating mock legislation based on the script. For example:

Sec. 21.189-20. – Public amenity charges; exemptions for certain officials; registry of “Public Official” seals; renting of public amenities. A person who violates this Section shall be punishable by removal to Urinetown.