Home » Topics » Academics » Farewell to an admired colleague and friend 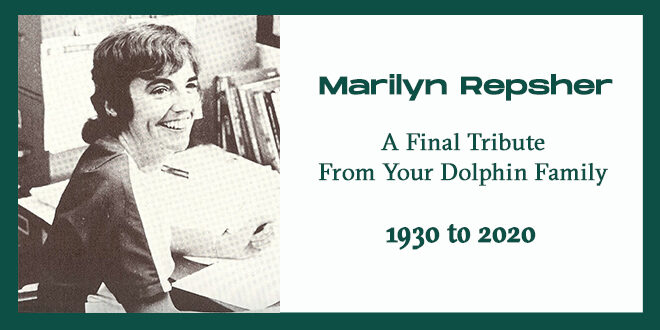 Farewell to an admired colleague and friend

It is with a heavy heart that Jacksonville University announces the passing of an educator who inspired hundreds of students and colleagues on our campus throughout her life and career — Dr. Marilyn Repsher. She was 90 years old.

A professor of mathematics from 1969 to 2009, Dr. Repsher joined the University when hair was long, Nixon was president, and the Beatles were on Abbey Road. In the 40 years that she was a member of the JU family, she served as the head of the math department and established the University’s computer information systems major. She also inspired her students and colleagues alike, sharing her joy of mathematics with all who knew her. It was a joy that may have originated with her mother, who was a math teacher, a joy that propelled her through a bachelor’s degree from D’Youville College, a master’s from Catholic University and a doctorate from Columbia University.

Dr. Repsher referred to mathematics as a “glorious ride,” and for her, that ride was filled with accolades and accomplishments. Her honors included the JU Professor of the Year award for 1977-1978, the Council for the Advancement and Support of Education (CASE) U.S. Professor of the Year in 1999, a Carnegie Scholar designation in 2000, and numerous awards of excellence from national, state and local organizations. She held several leadership positions in the Florida chapter of the Mathematical Association of America, and was the recipient of two Presidential Innovative Teaching Awards.

On campus, Dr. Repsher’s service to and influence within the JU community has been described as legendary. She was instrumental in elevating JU’s mathematics program. She led the drive to renovate the university’s mathematics classrooms and was truly cutting-edge in her desire to integrate technology and business analysis into the mathematics curriculum. In addition, she chaired countless committees, served as chair of the mathematics department and as interim chair of the division of science and mathematics. Most recently, she served on the Board of Wilma’s Little People’s School.

Dr. Repsher retired from JU in 2009. In that year, the university named the Center for Teaching and Learning, originally founded by her, in her honor. Her approach to teaching, however, was not driven by the recognition she so rightfully deserved but by a true desire to investigate how students best learn collegiate mathematics. She published numerous articles and was a sought-after speaker on this topic. She must have been a natural because her students have sung her praises.

According to their testimonies, she inspired, encouraged and elevated. “She changed my life,” one once said, and it is in their accomplishments that Dr. Repsher’s love of mathematics lives on. This was not lost on her. Dr. Repsher believed in her students. She knew they were “going places,” as she once said. Thanks to you, Dr. Repsher, they most certainly are.