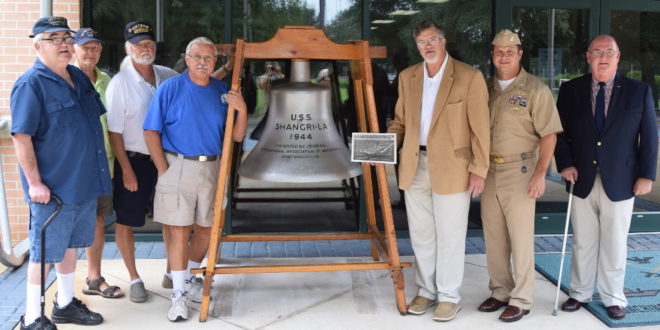 The University’s NROTC Unit is now home to the bell originally slated to ring on the deck of the famed World War II aircraft carrier USS Shangri-La (CV-38), but damaged in a fire and later found rusting in a farmer’s yard.

The ship’s Reunion Group and representatives from the Naval Order of the United States’ Florida First Coast Commandery came to the rescue and recently delivered the nearly half-ton refurbished bell as a permanent loan to the JU Naval Reserve Officer Training Corps. They helped JU staff hoist it to its display stand in front of the Tillie K. Fowler NROTC Building on North Campus.

The USS Shangri-La was commissioned into Naval service on Sept. 15, 1944, during WWII. But before the bell could even be installed on the ship’s deck as it went into combat, it was in a warehouse fire, and because heat may have damaged it, the U.S. Navy cast a new bell for the carrier.

The Shangri-La and  her attached air group then began launching their first combat missions in the Pacific theater, including the atom bomb testing conducted in Bikini Atoll in 1946 and various deployments around the world, from the Mediterranean to the Caribbean. Her final call to duty was during the Vietnam War, where she and her air group launched combat strikes into North Vietnam from Yankee Station.

The USS Shangri-La started her career home-ported in San Diego and completed her service at Naval Station Mayport, from 1960-1971. She was decommissioned on July 30, 1971.

After two months of hard work, and more than 70 years after it was originally cast, the bell was back in pristine condition. The Reunion Group brought it to JU on Sept. 6, and with assistance from Physical Plant staff and a little elbow grease, it was put in place.

Members of the JUNROTC say they are honored the unit was selected by the Reunion Group and Naval Order as the new home for the Shangri-La’s originally cast bell. They plan to host the USS Shangri-La Reunion Group in October 2018 so all its members get a chance to see the bell. As many as 75 former crew members may attend.

For more information on the USS Shangri-La and her history, visit http://cva38.havoc-creative.com/ or http://www.kellycrawford.org/ShangriLa/. Information on the Naval Order can be found at www.navalorder.org