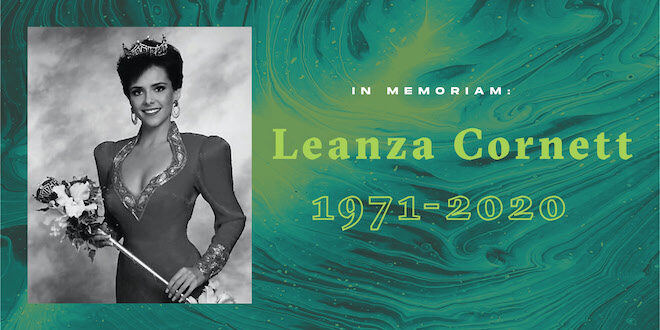 To the world at large, Leanza Cornett was perhaps best known as a former Miss America, a successful television host, or even The Little Mermaid, but she was also a famed resident of Jacksonville and – for a short time – a Jacksonville University Dolphin. She passed away recently after suffering a head injury. She was 49 years old.

Cornett attended classes in the university’s theater department from 1989 to 1991. She performed in plays, lived in the dorms and was a member of the Tri Delta sorority, but from the very beginning, there was something extra striking about her.

“She was just truly an amazing person,” said Elaine Borne, executive director of the Jacksonville University Student Health Center. Borne and Cornett attended JU together after attending Terry Parker High School in Duval County. They were both involved in pageants and became fast friends after reconnecting on campus. “She was beautiful inside and out, and was so much fun,” added Borne. “You just knew she was going to go forward and do amazing things.”

And Cornett did just that. After winning the Miss Jacksonville pageant at the age of 18, she went on to win Miss Jacksonville University, Miss Winter Park, Miss Florida and, ultimately, the Miss America pageant, becoming the first Florida contestant to do so. It was, by any measure, a triumph that led to a certain degree of instant fame and many other show business opportunities.

She was a correspondent for “Entertainment Tonight,” hosted talk shows and television specials, and made guest appearances on several popular TV series. Early in her career, she was selected as the first actress to play Ariel in the live action “Voyage of the Little Mermaid” show at Disney’s Hollywood Studios, located inside the Walt Disney World Resort in Orlando, Fla. To this day, visitors can hear Cornett’s voice singing to them as they enjoy the attraction.

It’s a voice that has been described as incredible, perfect, and masterfully controlled — a voice that reached many, but not always in song. Cornett was a staunch advocate for AIDS awareness, a cause she championed after working with children impacted by the condition. The cause would form the basis of her pageant platform at a time when the subject was considered taboo. By all accounts, she was a true trailblazer in this respect.

“When she took on the platform of AIDS awareness, she gave it a voice it didn’t have,” said Ryan Davis, a long-time friend who met Cornett at the Miss Jacksonville pageant, just a few short years before her Miss America win. “It wasn’t a popular choice, but she didn’t let people tell her what to do. She stuck to her own beliefs, and she did what she thought was right, and she won.”

According to Davis, that’s just the type of person Cornett was. “She wasn’t looking for fame and fortune. She got it, but that wasn’t her. She was our local girl. She was someone who gave freely of herself. She was just such a beautiful person. She absolutely glowed.”

Basking in the light of that glow were the many people whose lives Cornett managed to touch. Her impact was far-reaching, and it reached all the way back to Jacksonville University in one of the best ways possible. “I had the most talented kid I ever saw come to JU because she thought it was a Miss America training school,” said Jesse Wright, former dean of the Linda Berry Stein College of Fine Arts. “She could dance, sing, act, play the piano and was really, really self-assured.”

How many others have found their way to JU because of Cornett? It’s a question that may never be answered, but at a school where the mission is “to prepare each student for life-long success in learning, achieving, leading and serving,” one thing is clear. Cornett did all that and more. She will be missed by her family, her friends and her fellow Dolphins who remain so grateful for the gifts she gave so freely, whether recognized or unknown.