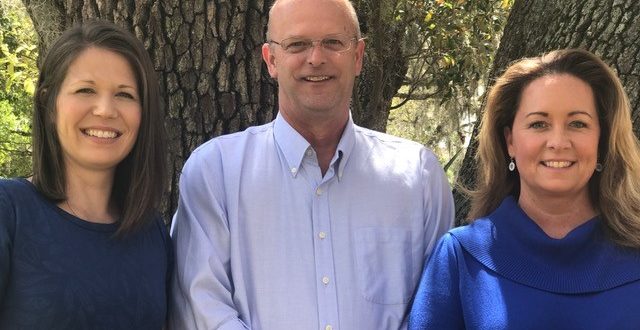 Lindsay Wolf brings her daughters ages 1, 3 and 4 to school so her graduate pediatrics students have real-world patients to examine and learn from.

Amber Santos puts on “PhinTank” modeled on the “Shark Tank” idea pitch show at the Keigwin School of Nursing. She also had a former patient who fit in the palm of her hand as a newborn visit JU as a teenager to speak to her class about the special years-long bonds formed between nurse and patient.

All three professors in JU’s Keigwin School of Nursing are winners of this year’s prestigious Great 100 Nurses of Northeast Florida Award honoring the area’s top nurses. According to the non-profit, the coveted recognition is given every two years only to “nurses who have demonstrated outstanding contributions to not only the patients and families for whom they care, but to the profession as a whole and the community in which they live. Selection as a Great 100 is not only an honor, but outward recognition of those who personify what is best in nursing.”

LINDSAY WOLF is a full-time Assistant Professor of Nursing in the Keigwin School of Nursing, where she primarily teaches undergraduate and graduate pediatric courses. She also teaches research, pharmacology and assessment courses. She is also a nurse practitioner in pediatric primary care for Carither’s Pediatrics Group. Dr. Wolf received her BSN at the University of North Florida and Doctor of Nursing Practice from the University of Florida. Her main areas of interest include the pediatric population, particularly children with special needs.

Among her many instructional activities, in her undergraduate pediatric theory course, she has developed a simulation that all undergraduate students rotate through prior to arriving on the unit at Wolfson Children’s Hospital. It consists of three live simulations: a child in respiratory distress, a child with Sickle Cell pain crisis and an Oncology patient with fever and neutropenia.

“The students are [also] exposed to a cultural station where they must interact with an individual of another culture and determine how to properly mix a formula bottle,” Dr. Wolf said.

In her graduate pediatrics course, she and a colleague have developed a live simulation for students to practice prior to starting their clinical rotation. Dr. Wolf brings in her three young daughters so students are able to practice firsthand — looking in a pediatric ear, for example, or checking infant hips, or palpating their abdomens.

“This was very new to them, as they are all adult nurses,” she said. “This was an incredible experience for the students, and we received raving feedback.”

“I am passionate about nursing education and that students be given the best experience they can have,” Dr. Wolf said. “I enjoy trying new things and innovative learning techniques to help the students engage and store the knowledge better.”

DENNIS OAKES is an Assistant Professor in the Keigwin School of Nursing, and a 27-plus year U.S. Air Force Nurse Corps Officer. He obtained his BSN from Virginia Commonwealth University/Medical College of Virginia and an MS in Trauma/Critical Care Nursing from the University of Maryland at Baltimore. His military and nursing experience include Medical-Surgical Nursing, Trauma Nursing, Emergency Nursing, Leadership/Administration and Informatics. His primary areas of research interest include critical care nursing, emergency nursing and leadership/administration.

“I use stories and real-life experiences to emphasize the ‘must- know’ concepts,” he said.

His mentoring does not stop with students. Oakes has helped guide a new faculty member on University and Keigwin School of Nursing policies, procedures and courses, and assisted two other new faculty members in prepping a junior-level course while co-teaching with them.

AMBER SANTOS is a Keigwin School of Nursing graduate who obtained her BSN in 1998, MSN in 2006 and MBA from the Davis College of Business in 2006. She was an adjunct pediatric clinical instructor for JU prior to accepting a full-time position as a Clinical Assistant Professor of Nursing in October 2012. Santos was appointed Director of Undergraduate Programs for the school in June 2014 and served in that role for three years. Her passion is teaching students, and she is back in the classroom full-time as of May 2017 as a Clinical Assistant Professor of Nursing. She worked as a Pediatric nurse for the majority of her career in the Neonatal Intensive Care Unit and outpatient specialty clinic as a research nurse and manager.

After feedback from hospital partners, Santos co-created and taught an elective course in performance improvement and healthcare quality. Students learned that healthcare is a business in which they will play an extremely important role as nurses. Santos then came up with the idea of students presenting their process improvement ideas to the college in a “Shark Tank” setting, which was called “PhinTank.”

“I am passionate about bringing evidence-based practice research into every course I teach,” she said. “I consistently modify my theory courses based on student feedback, performance on standardized assessments and senior exit interview feedback.”

Watching students flourish in JU’s Nursing program is the most rewarding part of Santos’ role as an educator, she said, and she does whatever it takes to help students learn and achieve their goals, even if it means teaching extra in the evenings or weekends. One of her favorite activities for students is called “Peds and Popcorn,” a fun way for students to learn (https://wavemagazineonline.com/nursing-professor-makes-learning-fun-students/).

“I always knew that the last chapter of my nursing career would be as an educator. What I didn’t know was how incredibly rewarding it would be. I am truly blessed to pass on what I learned from great nurse educators.”