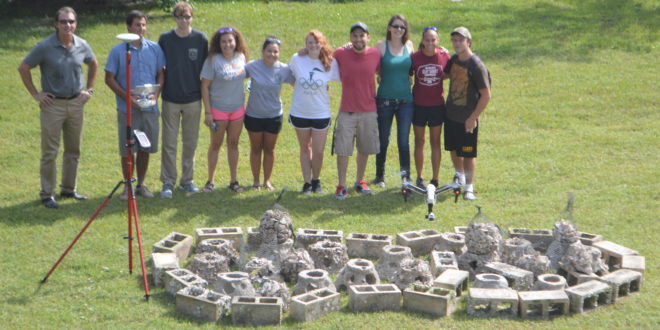 A Collaborate JU project involving the Schools of Aviation and Geography and the Marine Science Research Institute has created an Experiential Learning outlet for students with important implications  for  the St. Johns River and its oyster beds.

The Oyster Reef Assessment Experiential Learning Project, born in the spring of 2015 and funded by the University’s EPIC program, has blossomed into a crucial study of oyster beds in the Timucuan Ecological Preserve which is part of the U.S. National Park Service.

Oyster harvesting was shut down in Duval County more than 20 years ago because of concerns about water quality and a lack of systemic sampling to insure harvesting of healthy oysters.

The City of Jacksonville now has undertaken a water quality study to evaluate the potential of resuming oyster harvesting and the MSRI has assisted in the assessment to reclassifying the area safe for recreational oyster harvesting with several projects.

The use of drones to assess the health of the river grew out of a conversation between Assistant Professor of Aeronautics Ross Stevenson and Dr. Quinton White about research needs in the area.

Stephenson’s involvement began when with photos from his drone he constructed 3-dimensional models of University buildings.

Dr. White, executive director of the MSRI and professor of biology and marine science, took notice and conceived the idea to photograph the oyster area.

The professors worked out some of the first details of the project and the drone was sent on its mission. It flew over the marsh and tidal areas, at an altitude of about 100 feet, for photos of oyster reefs.

“He loved them,’’ Stephenson said.

The project’s concept began to evolve, Stephenson and White set up an Experiential Learning program for students to learn to fly the drones and a proposal was put forth to Terri Davlantes, Executive Director of the EPIC program, for funding.

Funding was received and permits to fly in the Preserve were issued by the federal government. Stephenson and his cadre of student pilots, who were learning how to plan flights, assess the risks inherent to fly in the area, techniques in photography and data acquisition, began in earnest in the summer of 2015 after receiving their EPIC-funded drones.

“You start with a baseline and catalogue where these (oyster reefs) are,’’ Stephenson said. “We can fly our drones with multi-spectral cameras over the tidal areas and can catalogue the different reflective surfaces. For instance, water, dirt, sand, mud, oyster shells, grass all reflect infrared light differently; the cameras can determine how much of is oyster shell at a certain tide level. The software can tell you what percentage of a picture is IR reflectance, from time to time you can go back and take the same pictures at the same tide levels and compare. That’s in the big picture. In the small picture you depict certain beds in that research are to actually get a micro analysis. It will capture the exact shape, size and detail of the bed.’’

Original mapping was accurate to 1.5-meters but with major technological advances in a short time, including the project acquiring a survey-grade GPS this summer, mapping is now accurate to within one centimeter, Stephenson said.

“Because of software upgrades this summer, students can create a 3-D model and measure the exact size of the mound,’’ he said. “With our new assets we can

create the mapping we need to determine if the population of oysters has recovered since they were overpopulated and after the damage done from the septic tank runoff into the tidal areas.’’

With Stephenson’s efforts, Dr. White has been able to build a replica oyster reef on campus.

“I built a model oyster reef to give us a test facility and fly around and look at,’’ he said. “Professor Stephenson has given us some good photos and now I need more to analyze it. We’re still learning but that’s what research is: do, repeat, do repeat.’’

White has been surprised by reaction as others learn of the local efforts and notes future applications abound.

“I am astounded at the interest we’ve had in our doing it and how many other people either want to do, plan to do it or hope to do it,’’ he said. “It’s coming technology. It’s simply too quick, too easy and too cost effective not to. So many times when we are trying to assess various areas, getting to it without damaging it becomes a major problem. Now, we can fly over it, take high quality images and with some of the computer software do some amazing analysis. It’s fun because we’re out there with other people on the leading edge.’’