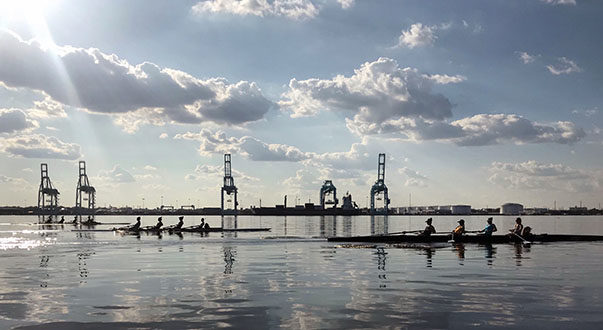 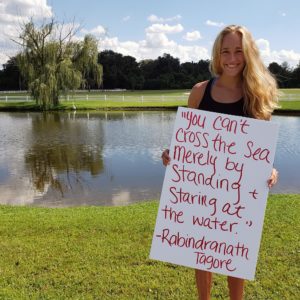 Madison Boyer, a junior sports business major at Jacksonville University (JU), has rowed for the JU women’s rowing team for two years since walking on as a freshman. Madison played softball from the time she was three, but when she arrived at JU she wanted to try something different.

“I wasn’t coming to school to play softball, but I still needed something to do. So, I decided to give rowing a try and just fell in love with it.”

Originally from Ohio, Madison wanted to escape the snow. “I only applied to schools in Florida, and I knew this was where I wanted to be,” she said.

Madison wanted to attend a larger school originally, but that changed when she toured JU’s campus. “JU doesn’t have thousands of students enrolled, but it feels giant when you’re here. At the same time, I love how tight-knit it feels. Everyone knows everyone,” she said.

“We are all helping each other and getting better together.”


As a walk-on, Madison had to work hard to make the varsity team. Becoming a part of the team has since provided her with the opportunity to make lifelong friends. “These girls are some of my best friends and I love getting to practice with them,” Madison said. “Outside of practice we go to other sporting events together and hang out all the time.”

Madison says that one of her favorite part of rowing is fueling her competitive nature, but her greatest takeaway is the positive team atmosphere. “You have to trust everyone on the team to do their job. One individual can’t row the boat alone,” she said.

The JU women’s rowing team has won the MAAC Championship the last five years in a row, and Madison has raced in the last two. The teams race twice on race day, once in the morning and once in the evening. The top five teams then race for the championship. During Madison’s first win and JU’s fourth, the team collected 60 points by winning every event of the day.

In her second championship, JU won two of the day’s races and collected 53 points. “I was lucky enough to win gold both of the years I raced,” Madison said. “It’s nerve-wracking because we have no idea what the other crews are going to be able to do on race day. It got easier the second year, but it still wasn’t a guaranteed win.”

In the last conference, Madison won “All-MAAC First Team,” which are the top rowers from each boat. She was chosen for this alongside JU rowers Claire McLenna, Stacey Price, and Jessica Shipowski. When the team wins their conferences, they travel to the NCAA Championship and race against the top teams in the country.

“Last year we went up to Alabama, which was a great opportunity for us. We’re a smaller team, but still Division I. Bigger schools who have bigger teams don’t expect us to be able to compete with them. Knowing that I am in one of the top 22 teams that can be up there is such an honor.”

After Madison graduates with her sports business degree, her goal is to find a job in project management for the National Football League. “I want to be at the forefront of their projects as they evolve,” she said. “Rowing has made me optimistic and excited to work on those teams in the future. I know there will always be people backing me up.”