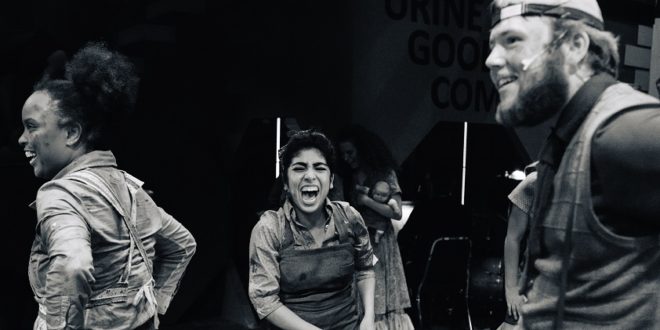 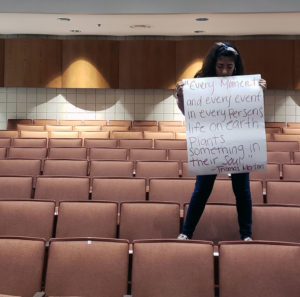 Isabella Martinez, a junior musical theatre student at Jacksonville University (JU), has been on the stage her entire life. “My parents had me try everything when I was little,” Isabella said. “They put me in all kinds of sports, but theatre was the one thing that really excited me.”

It all started the first time she was given a solo in a performance of “Good Morning Starshine” from the musical Hair. “I remember feeling so important, like for the first time, I could be really great at something,” she said. “I think when you feel something like that, you should chase it. I’ve been chasing that feeling forever.”

Like many artists, it was difficult for her to decide whether or not to make a career out of acting. “I avoided it for a little while because I know how hard it is for artists to make a living,” Isabella said. “My parents told me that didn’t matter and that I should be doing whatever makes me happiest.”

Not only were her parents telling her to keep fighting for her dream, but something inside of her was too. “The more I tried to leave it or ignore it by changing my major, the more parts I was getting offered in the community,” she said. “I kept feeling like this was exactly what I was supposed to be doing.”

Isabella takes the stage not only at JU, but at local community theatres, including The 5 and Dime, Players By The Sea, All Beaches Experimental Theatre or ABET, Theatre Jacksonville, and Phase 8 Theater Company. “My freshman year here, I actually wasn’t cast in any shows,” she said. “I think I took it very well; I knew that it was because I wasn’t necessarily a good fit for those roles and that it didn’t have anything to do with my talent level.”

This experience allowed her to explore acting in the community and learn more about versatility and getting along with other actors and directors, while also studying with JU’s unique acting professors in intimate class settings. “Through my experiences, I know for sure that I will go into the world with a great attitude,” she said.

Isabella’s experience in community acting landed her the 2017 Players By The Sea Pelican Award for Best Actress in a musical, for the role of Whatsername in the musical American Idiot. She has also played roles in some of her favorite musicals, including Marta in Stephen Sondheim’s Company.

“People don’t know what’s possible unless they can see themselves in those roles. Not just in the theatre, but in the world. Little girls aren’t going to believe that they can become doctors or scientists until they see a woman doctor or scientist.”

Isabella describes herself as “extremely passionate” when it comes to representation in theatre. “I have a love-hate relationship with theatre, actually,” she said. “It is a very old art form and sometimes you see the same kind of thing over and over again. A lot of theatre is flat, one-dimensional, and trapped in the same tropes.”

The reason she loves it is the direction the art is headed. Stories like Hamilton, In the Heights, and The Color Purple are changing the way communities are represented in theatre. “The audiences that go to the theater want to see themselves represented on stage,” she said. “The first time I saw Into the Woods, The Baker was played by a Latino and it really made me feel like I could be doing that too.”

Aside from performing, Isabella has also started writing, on her own  and with creative partners. “Theatre is the ultimate storytelling platform and when you put your story out there, you may never know who it’s going to resonate with,” she said.

“If you don’t see a role for yourself, write it. No one else is going to write your dream role besides you.”

In addition to diverse representation on stage, Isabella has also taken an interest in changing the way women’s stories are depicted. “I’ve done shows nonstop since I was in high school and every show I’ve been in, a man was the lead and has gotten the last bow,” she said. “So many stories are male-centered in a form of art where most of the talent pool is made up of women. I think, moving forward, our stories should represent the community most affected by the art.”

Isabella will be stepping onto the stage again as The Baker’s Wife in JU’s production of Into The Woods, opening Nov. 1.

Into The Woods, a mash-up of Grimm’s Fairy tales written by Stephen Sondheim and James Lapine,  demonstrates lessons about life choices. In the first act, all the characters make a wish and by the end of the first act, all their wishes have come true. In the second act, they realize that they are not as happy as they thought they would be. “They realize there are consequences to their actions,” Isabella said. “Everyone in the beginning is either good or bad. My character just wants to have a child, which is a seemingly noble thing to want in life, but then you realize that she’s not really all that noble or good.”

“This teaches me that sometimes you can’t take people at face value. We see what people want us to see, but we don’t know their true intentions.”

After graduation, Isabella would like to continue pursuing theatre and explore the possibilities of film and television. She would also like to continue writing and produce her own work. “When you’re an actor, you don’t really have a say in what kinds of characters you get to play,” she said. “I want to create characters and stories that I’m proud of and that make other people want to become a part of the story.”

Tags Class of 2020 College of Fine Arts ELEMENTALSJU Into The Woods Isabella Martinez Players By The Sea the 5 and dime Urinetown: The Musical