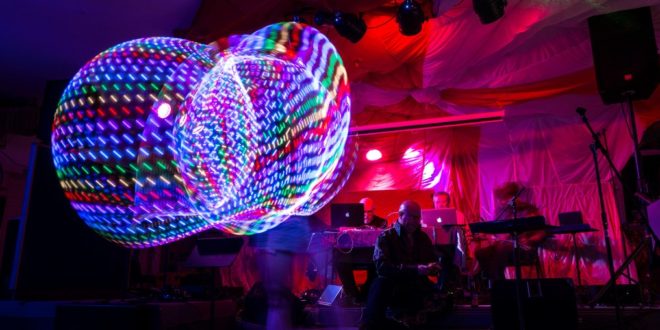 The Seventh Annual Electroacoustic Barn Dance is coming Feb. 8-10 to Jacksonville University, a free three-day national festival of electronic music and art drawing acclaimed composers and artists from as far away as Estonia.

On stage performing with top student and faculty composers from dozens of universities at this year’s event will be the JU Music Division’s own Faculty New Music Ensemble: Dr. Shannon Lockwood on cello, Artist-in-Residence Tony Steve on percussion and Director of Jazz Studies John Ricci on saxophone.

Electroacoustic music showcases multimedia by mixing analog and digital sounds, often with video, with performers using computers as control stations while traditional instruments are also played. At any given concert at the Barn Dance, you can expect to hear musical works in eight-channel surround sound; acoustic instruments processed to sound like clouds, sandpaper, and steel; video works that embrace the real, the colorful and the heavily abstract; works performed by the audience members from their seats; and works played on instruments created by the composers themselves.

ates its own sonic environment, and no two will be quite alike,” said festival founder Mark Snyder, a composer and performer as well as Visiting Assistant Professor of Music Business in the College of Fine Arts at JU.

The festival is an academic conference for electronic artists, with more than 300 scores, papers and installations judged for entry. Composers come from diverse backgrounds and include winners of the Rome Prize, the Morton Gould Young Composers Award, the Barlow International Competition, the ASCAP/SEAMUS award and many others.

“All of the composers with pieces at the Barn Dance will be present, so audience members will have the opportunity to interact with both the performers and creators of what they hear,” Snyder said.

In all, 94 composers representing 67 different universities will be present, including 10 students in JU’s electronic music course who will have their pieces performed and will help with tech at the concerts. 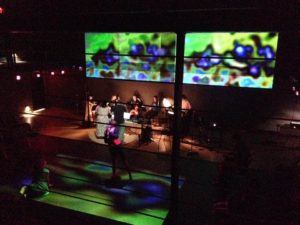 All events are all-ages and free to the public. For the full schedule of concerts, installations, papers and after-hours shows, including event locations and times, visit eabarndance.com/schedule. For more information about attending, contact the JU Division of Music at (904) 256-7370 or visit the Facebook event page.