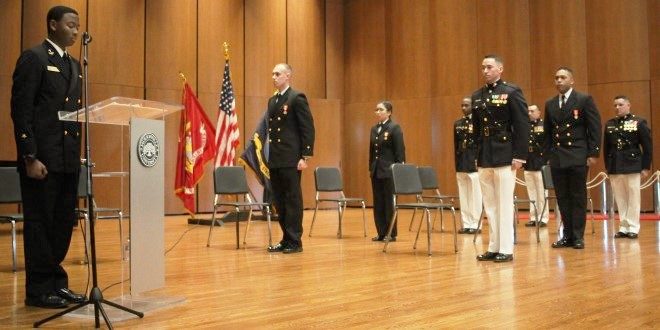 Three received commissions as Navy ensigns. They are:

Four received Marine Corps commissions as second lieutenants. They are:

“As I read the biographies for these officers, they have already been serving our country. The fact that they continue to serve – to step into ranks with the best of the best – is something we must be very thankful for,” Vice Admiral Jackson said. “You are joining during a dynamic time. Our Nation needs you. We need you to be leaders at a critically important time as we’re witnessing a return to Great Power Competition.”

Vice Admiral Jackson is one of only 40 Naval officers with the rank of vice admiral or above. She is the commander of Navy Installations Command, which consists of the Navy’s on-shore infrastructure of 71 installations and more than 1 million acres of land. She is also the Flag Officer responsible for the University’s NROTC program.

The Navy formally dedicated the first NROTC Unit in Florida during ceremonies at Jacksonville University on Sept. 23, 1971. Since then, the Unit has commissioned Navy ensigns and Marine Corps second lieutenants for service in many military disciplines, including surface warfare, submarine warfare, naval aviation, nursing, nuclear power and Marine Corps occupational specialties.

“The Jacksonville University NROTC program has a long history of leaders who serve in the greatest Navy and Marine Corps in the world,” Vice Admiral Jackson said. “The staff and instructors have set these young men and women on the right navigation track to be successful.”

Jacksonville University is one of only five Florida universities that offer NROTC training.