Home » Topics » Academics » Dr. Quinton White to Fall 2016 graduates: embrace life-changing events, be thankful for those who helped shape them 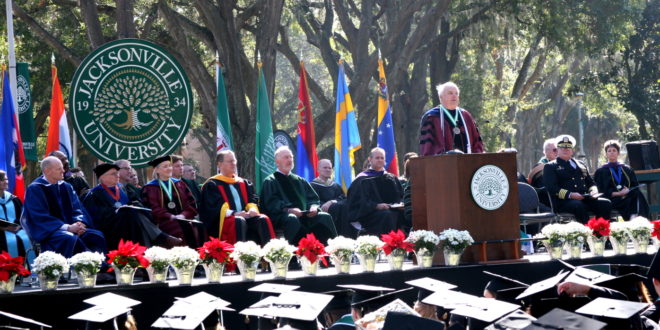 Dr. Quinton White to Fall 2016 graduates: embrace life-changing events, be thankful for those who helped shape them

Life-changing experiences almost always occur without warning but often arise because of decisions we’ve made earlier, so take them as the gifts they are – and appreciate the people who helped make them possible.

That was part of the wisdom imparted Saturday, Dec. 17, to graduates by Dr. Quinton White, Executive Director of the Jacksonville University Marine Science Research Institute, as JU celebrated its Fall 2016 Commencement. 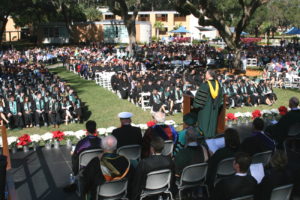 “Your life will not be determined by any one big decision, but by countless little ones, most with unseen consequences. Relax and just work hard and do your best,” said Dr. White, the first sitting JU professor ever to deliver a Commencement keynote at the University. His spirited address also touched upon the environment, plusses and perils of technology and the onslaught of “fake news” that is blurring the ability to separate fact from fiction.

With thick early-morning fog giving way to bright skies, the 82-year-old University awarded 366 degrees at the ceremony held under a canopy of towering oaks on its Science Green. Of the total, the most-awarded degrees included 152 bachelor of nursing degrees, 83 master of nursing degrees and 32 master of business administration degrees. Sixty-two students graduated with Latin honors, which are earned by students with a minimum GPA of 3.50 with 60 graded credits at JU. In addition, two students graduated with their bachelor’s degrees and earned University Honors.

JU President Tim Cost praised the graduates, who have gained their educations during an unprecedented era of growth and improvement in the campus’ grounds, facilities, faculty and programs.

“I offer my warmest congratulations and all the respect due you. You have shown yourselves to be dynamic, collaborative and energetic achievers. You have excelled, and have made this University far better than the one you entered,” Cost said. “With new talent, new investment and new programs, Jacksonville University is open to all possibilities and bringing excellence to the community and beyond.”

Top highlights of the past year include:

(See more highlights of 2016 at the end of this story, as well as a photo gallery.)

In his introduction of Dr. White, Cost, a 1981 JU alumnus, described him as a man on a passionate mission to mix inspiring education with advocacy, all the while focusing on championing our area’s waterways and marine life.

Known as “Mr. Science of Northeast Florida,” Dr. White joined the faculty at Jacksonville University in 1976. A Professor of Biology and Marine Science, he has written numerous research and technical papers and reports, attracted hundreds of thousands of dollars in grants and contracts for marine research at JU, and is responsible for the $10 million, 32,000-square-foot, LEED Gold-certified MSRI on campus. 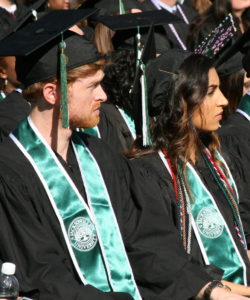 He was a key drafter of the City of Jacksonville’s Manatee Protection Plan and is a passionate advocate for these vulnerable marine mammals. He serves as an expert resource to civic groups, government agencies, elementary school children and college students; writes a monthly column in The Florida Times-Union called “River Life”; and has won a trove of awards, including the Florida Wildlife Federation Marine Conservationist of the Year in 2015, Regional Leadership Award from the Northeast Florida Regional Council and City of Jacksonville’s Christi P. Veleta Environmental Award in 2014.

In a keynote that drew laughs as well as knowing nods, Dr. White told the students to expect change and observe the world and people around them.

He spoke of desires in his life and career that never came to be, but of events and choices that led to service in Vietnam that dramatically shaped him; unplanned-for research that led to completion of his Ph.D.; and employment at JU as a visiting professor where he met his wife-to-be, pediatrician Dr. Susan Hite White, and then led a lengthy, fruitful career in the marine sciences.

Each step of progress was aided by someone’s help and influence, he noted, quoting poet John Donne’s “No Man is an Island” to drive home his point.

“Human beings do not thrive when isolated from others. I am concerned about the use of technology today … Texting is not talking, and it is communication in a very limited way,” Dr. White said. “Get to know people in a meaningful way. Having a bunch of Facebook friends and LinkedIn connections, Twitter or Instagram followers is pretty shallow.” 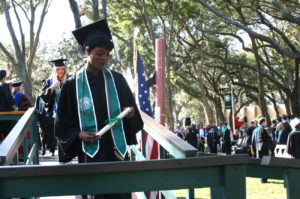 Instead, growth comes from real interaction, he said, along with consistently submersing oneself in subjects such as art, music, literature, the humanities, science and mathematics.

“Read. And I don’t mean on your phone,” he implored the students. “Read newspapers, magazines,  books … try to understand what is happening around you and why. Fake news is a huge problem — a great deal of fiction, untruths and false information is out there. Some people say things long enough and loud enough, and folks start to think they are true.”

And while their futures will be “amazing” as technology becomes more powerful and life more convenient, Dr. White closed on a cautionary note on the subject nearest and dearest to him: the ecology. His hope is that over the years he has imparted enough knowledge and inspiration that his students and the public understand the importance of preserving it.

“I do hope at some point we come to understand that in order to have a healthy, vibrant economy, we must have a clean and healthy ecosystem. Jobs are not more important than clean air and water. We can have both, but it requires thoughtful, intelligent and well-educated people.

“That is where you come in.”