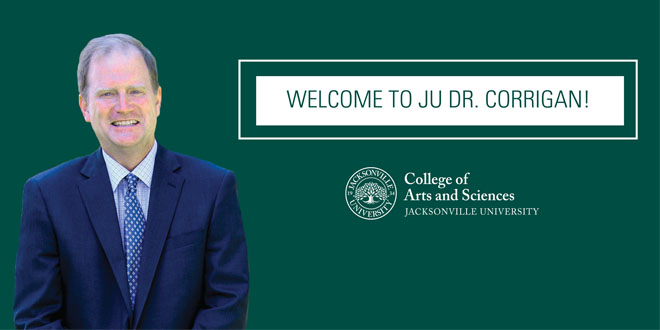 There’s a new face on campus, though he’s hardly “new” to Jacksonville. In fact, his is one of the most recognized names in North Florida as an author, educator, political scientist and respected scholar.

Dr. Matthew Corrigan joins the Jacksonville University (JU) family this week as the new Dean of the College of Arts and Sciences, where he will help enhance and strengthen the humanities and the sciences — the foundation of a JU education.

“Dr. Corrigan is a proven academic leader, energetic faculty advocate, and tireless mentor who can help instill in all of our students the critical thinking, communication and problem solving skills that are necessary for lifelong success no matter their field of study,” said Jacksonville University Provost Dr. Christine Sapienza.

“Dr. Corrigan has a special talent; a scholar, teacher and academic servant of the highest quality.”

Dr. Corrigan frequently appears on television and radio broadcasts as a political commentator, sharing his expertise on political processes and policies. He’s also published three books, with a fourth book coming soon, as well as several peer-reviewed articles and chapters.

“Dr. Corrigan has a special talent; a scholar, teacher and academic servant of the highest quality.  He is equally adept at speaking to an academic conference, a Rotary Club, or being interviewed on television,” said Delaney, who, as former President of UNF, worked closely with Dr. Corrigan for several years.

As a mentor, Dr. Corrigan has a strong record of cultivating in his students an appreciation for local issues and a passion for community engagement. He frequently lectures on topics that are highly relevant to Northeast Florida, including disaster management, downtown development, and growth of the millennial generation in our community. As a Jacksonville native, he is passionate about creating opportunities for students to remain in Jacksonville after graduation to contribute to the fabric of the local business and civic community.

“Dr. Corrigan is one of a handful of academics with a strong commitment to teaching both on campus and in the community at-large.” said Dr. Susan A. MacManus, Distinguished Professor Emerita in the Department of Government and International Affairs at the University of South Florida. MacManus praised Corrigan’s ability to present “complex information in an interesting and understandable manner” to a variety of audiences.

In the broader Dolphin network, JU alumni are excited for such an experienced educator and nationally recognized political thought leader to join the faculty and lead the College of Arts and Sciences.

“Matt is the perfect choice,” said Michael Freed ‘90, former JU Trustee and past president of the JU Alumni Board of Governors. “His academic credentials are top-notch; he is a skilled and thoughtful administrator; and he has earned the respect of students and faculty alike. I have every confidence that he will elevate the JU College of Arts and Sciences, enhance experiential learning and ensure that JU students receive a comprehensive education.”

Since its very founding in 1934, Jacksonville University has been committed to providing a quality education in the humanities and the sciences, which paved the way for the formal establishment of the College of Arts and Sciences in 1967. The College’s mission is to enrich the lives of students by deepening their knowledge of human cultures, the physical and natural world, intellectual and practical skills, personal and social responsibility, and interconnected learning. All students, regardless of their major, complete courses in these areas as part of the University’s core curriculum, which creates a strong educational foundation for further study in specialized fields.