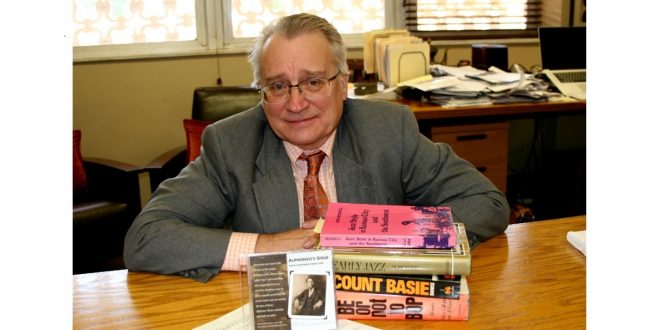 When he first dropped the needle on the vinyl more than three decades ago, Dr. Henry Rinne thought he was hearing the sophisticated jazz arrangements and rhythms of Duke Ellington. Or Count Basie. Or some other Big Band giant out of New York or Chicago.

But what was bouncing out from the record was musical mastery from his own backyard.

Rinne, then an instructor and jazz artist at the University of Arkansas at Fort Smith, was getting an introduction to the city’s own Alphonso Trent. A nationally renowned jazz pianist, he had led the Alphonso Trent Orchestra, a group of young black musicians who made several recordings in the 1920s and ‘30s and toured the country as one of the most fabled of the “territory bands” – those that performed outside the major markets.

Rinne was hooked. He felt the infectious melodies of the nation’s first black orchestra, emphasizing tone quality and showmanship on tunes like “Gilded Kisses,” “Black and Blue Rhapsody,” “Nightmare” and “After You’ve Gone,” deserved as much attention as any from the musical legends of the era.

Yet Trent died a relatively obscure footnote in jazz history, at age 57 in 1959 of a heart attack in Fort Smith. That was despite breaking racial barriers, including netting a lengthy engagement for his band at the exclusive whites-only Adolphus Hotel in Dallas, and inspiring awe in his contemporaries. Those included famed tenor sax player and Benny Goodman collaborator Budd Johnson, who placed Trent among the “gods back in the ‘20s” who were years ahead of their time.

Rinne, who is now Dean of the College of Fine Arts at Jacksonville University, set about to change that. As a University of Arkansas instructor and researcher, he interviewed former Trent orchestra trumpeter Cleo Toran in the 1980s. He obtained oral histories of band members from the Rutgers University Institute of Jazz Studies. He delved into Trent further while attending a National Endowment for the Humanities summer seminar on African-American music at Howard University in 1985. Later, he pored through microfiche and black newspapers of the ‘20s to find whatever he could on Trent.

From his meticulous research came scholarly articles and magazine pieces written in the 1980s, and a one-act play about Trent that he completed the following decade.

Now, he’s taken his efforts a step further with a 30-minute documentary on Trent’s life. Rinne is co-executive producer with filmmaker John McIntosh of “Alphonso Trent and His Orchestra of Gold,” which is derived from Rinne’s play. The privately funded film premiered earlier this year at the Fort Smith Museum of History, and has drawn interest from PBS. 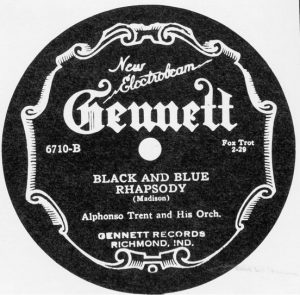 “It’s been a long time coming,” said Rinne, who prior to coming to JU in 2015 was founding dean of the College of Humanities and Social Sciences at UA-Fort Smith. “This was such an interesting band. They created all this on their own, in Texas and Arkansas, and developed their own style. They were influential. I wanted to know: Why didn’t they make it? Why don’t we know Trent like we know the other greats?”

After being approached several years ago by McIntosh, Rinne jumped at the chance to adapt his play for the documentary, which features actor Ryk St. Vincent (“A Time to Kill”) portraying orchestra singer John Fielding, who recounts Trent’s career from its start to his untimely death.

McIntosh praised Dr. Rinne’s work as the “complete basis” of the documentary.

“It is the most comprehensive research I’ve had the pleasure of working with,” he said. “As a jazz musician himself, I think he captured the essence of the dialogue from another era. Race relations were a given for the black performers of the era, and Dr. Rinne was able to capture that tension with honest dialogue. I believe that background gave our actor the room he needed to deliver the messages with just the right amount of disruption, and then move on with the story.”

With encouraging responses from audiences and critics, Rinne and McIntosh are now identifying potential producers who might see the opportunity for a full-length feature. Film festivals and various broadcast distribution channels are also under consideration to spread the word about the band leader and orchestra that wielded huge influence but whose story remains unknown to many.

“They were victims of the Great Depression, financial problems and a disastrous fire at a Cleveland club that destroyed all their instruments,” Rinne said of the Orchestra of Gold. “But they soldiered on, and Trent’s orchestra became an incubator for and huge influence on younger musicians. It turned out to be very important to what jazz became.

“And the bigger social issue was always there, of his band breaking down walls. We overlook that they played for white audiences … it was the very beginnings of recognition. We were changing from a culture of being segregated to becoming integrated. We forget that it’s something that happens in increments.”