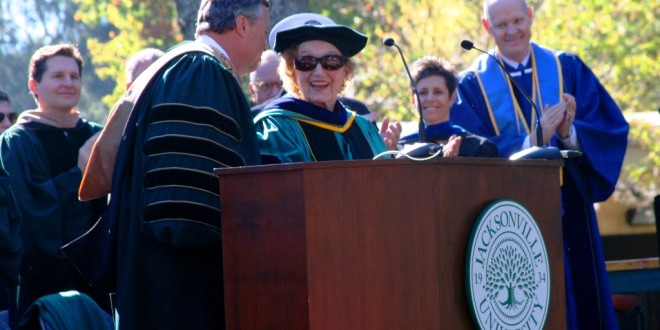 Dr. Frances Bartlett Kinne, who at 98 knows a little bit about accomplishments and happiness, told Jacksonville University graduates Saturday that they can have them, too, if they just learn a little bit about persistence and gratitude.

“We always think we deserve everything, and we wonder what we have to do to get it. Believe me, persistence was the thing that kept me going,” said Dr. Kinne, JU’s past president and chancellor emerita, who broke the record Saturday as the oldest known university commencement speaker when she delivered her keynote address to the fall 2015 graduating class. 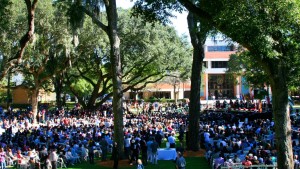 “If you’re eager to get something, whatever it is, go after it,” she said. “If you have a job, go in early and stay later, and show the persistence that will pay you back in happiness. And if you’re a positive thinker, according to Mayo Clinic, you’re going to live 10 years longer. Well, I’m already on the 10 years.”

Under sunny skies and tucked amid a canopy of towering oak trees, the 81-year-old University awarded 344 degrees at the ceremony on its Science Green. Of the total, the most-awarded degrees included 142 bachelor of nursing degrees, 60 master of nursing degrees and 34 master of business administration degrees. Forty-six students graduated with Latin honors, which are earned by students with a minimum GPA of 3.50 with 60 graded credits at JU. In addition, two students graduated with their bachelor’s degrees and earned University Honors.

JU President Tim Cost praised the graduates, who gained their educations during an unprecedented era of growth and improvement in the campus’ grounds, facilities, faculty and programs.

“This year we celebrate the start of our ninth decade as an educational institution, and this fall class is such an outstanding reminder of that remarkable achievement,” Cost said. “We celebrate them, we celebrate their families and we celebrate our faculty that have helped lead them these past years. I pay you the highest compliment when I say you’re leaving your university better than when you came here.”

Highlights of the past year include: 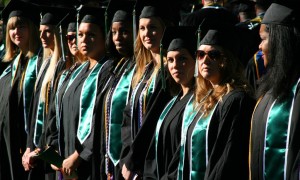 In his introduction of her, Cost, a 1981 JU alumnus who himself was mentored and inspired by Dr. Kinne, talked about her impact on so many students, and many others as well.

“Many of the people on this stage, in this region and across the country still go to her on a regular basis to talk about leadership, service and humility, and what it means to actually be a servant leader, before that term had actually been coined,” he said. “As president, she spent as much time with students as she did with the deans and the head of academic affairs, and the largest donors. … What Dr. Kinne represents at Jacksonville University is a spirit giving, a continuing to educate herself every day, an honoring of our outstanding faculty, and a focus on our students.”

Dr. Kinne began her JU career in 1958 as a humanities professor, and became the first female College of Fine Arts Dean in the world in 1961. She served in that capacity until being named JU’s president in 1979, becoming the first female president of a college or university in Florida. With Kinne as president, JU established what is now the Davis College of Business, the School of Nursing, the Aviation program, and the College of Arts and Sciences, among others.

She told the students how persistence allowed her to bring the many leaders and celebrities who spoke at JU for free during her tenure, bringing international attention to JU and the city. She is known for bringing Bob Hope and Jack Benny to Jacksonville University for their only appearance together on a college campus. Other notable people who appeared were President Gerald Ford, Winston Churchill, the Rev. Billy Graham, Linus Pauling, Charlton Heston, both “Dear Abby” and Ann Landers, and Maestro Arthur Fiedler (17 times).

Beyond achievements, however, giving thanks is what ultimately brings a sense of well-being and happiness, she stressed. 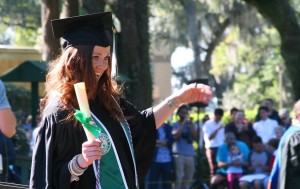 “How many times do we say thank you to everybody? I decided years ago, I’m going to thank all the people who helped me,” she said. “And you should thank them, too, as you will have many who helped you.”

Dr. Kinne shortened her keynote Saturday after a staff member fainted and required medical attention – instead offering thanks to the School of Nursing graduates, campus security and emergency personnel who responded to help. In a portion of her prepared remarks that was left out, she connected the characteristics of persistence and gratitude to the most important attribute of all for the students: their individual DNA.

“It is exciting to learn that each of us can do something no one else can do. What is it that you have or can do? … I will guarantee you you are going to be approached in many ways in life when you have to make a big decision, and your DNA is going to be very helpful in assisting you to be objective in coming to the correct solution. I know your DNA is going to take you far into the future with great success.”

Dr. Kinne closed on a personal note, thanking the graduates themselves for making it possible for her to be present and speak to them. Successful surgery for cancer in her leg was expedited – performed within 24 hours of her diagnosis – just so that she could offer her keynote, she said.

“As I always say, life is not about me, life is about others. If you knew what it meant to me to be here today. … They were able to get all the cancer, and I give you grads credit for this, I really do! You are my inspiration … You’re magnificent, you really are, and congratulations to you, and my love to you as you go out and make the world better.”

This year’s fall graduates hail from throughout the United States and from 11 other countries, and the University’s more than 26,000 alumni come from all 50 states and 92 countries.