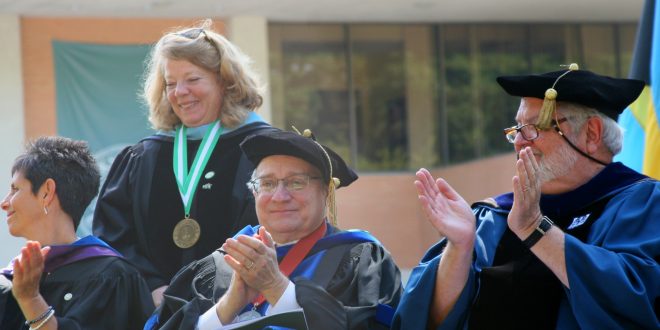 Dr. Colleen Wilson honored as 2016-17 Professor of the Year

Dr. Colleen Wilson, Department Chair and Associate Professor of Education in the School of Education, finds the opportunity to learn from her students and other educators especially rewarding, and now she’s been rewarded for her academic efforts over a 30-year career, with the 2016-17 Jacksonville University Eric and Mark Lammerding Professor of the Year Award.

Wilson and other JU faculty members were honored recently at the 58th annual Faculty Recognition Program. Other finalists for the top award were Dr. Barbara Doyle, Professor of Computing Science; Dr. Ray Oldakowski, Professor of Geography; and Dr. Fred Senftleber, Professor of Chemistry.

Wilson has been an educator since 1985, and in that time she has taught students in a variety of settings, including in delinquency, dependency, special education, public schools, private schools and residential programs.

She arrived at JU in September 1999, and has served the University as an educational resource specialist, community school liaison, assistant professor and, currently, as an associate professor and chair.

She is an invaluable asset to JU, from her teaching to her mentoring to representing the university multiple times at gatherings such as the annual southeastern regional association of teacher educators conference.

Wilson has consistently shown her commitment to the University and the community. Recently, she earned a juror’s position at the annual One Spark entrepreneurial event in downtown Jacksonville, and co-led a student service-learning center effort to help staff at the Jacksonville Zoo update its leopard exhibit. She also co-mentored JU students who took home three of four National Role Model awards at the Minority Access National Role Models Conference in washington.

She is especially inspired by and deeply proud of the JU graduates under her tutelage who have gone on to pursue their own doctoral degrees.

Wilson considers herself a lifelong student, studying how people learn and constantly on the prowl for new techniques to improve her teaching practices for all learners.

She is proud to be a first-generation college graduate.

Here are the bios of the other finalists: 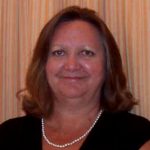 Barbara Doyle has been an educator for 35 years. She came to JU in 1992. From 1993-2002, she chaired the department and oversaw the Computer Science Education masters. In her early years at JU, she ran summer camps, provided K-12 teacher in-service training, and hosted workshops and multimedia conferences on campus.

During the 2003 and 2004 summers, she traveled across the country as a Microsoft “evangelist,” introducing a new computer programming language. As a result of that opportunity, she wrote and published Visual C#. NET in 2004 and has been authoring textbooks for the introductory Computer Science courses since then. The 5th edition of C# Programming: From Problem Analysis to Program Design was printed last summer.

Barbara currently chairs the Department of Computing Science. She’s served on the Tenure & Promotion Committee for the past 15 years and has recently led the Computing Science faculty through significant curriculum revisions. Doyle is very involved in Computing Science accreditation. She’s chaired more than a dozen ABET-CAC accreditation teams, and served as a commissioner and as a training support facilitator. 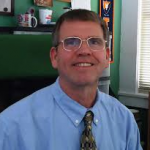 Dr. Ray Oldakowski is a past Chair of the Division of Social Sciences and director of the University’s Social Science Research Center. He serves as coordinator for the National Geographic State Geography Bee and is editor of the Florida Geographer. A recipient of the National Council for Geographic Education Distinguished Teaching Award and the JU Institutional Excellence Award in 2006, he is also a National Geographic Society Grant Recipient from 2004, member of the Leadership Jacksonville Class of 2007 and honoree for JU Excellence in Scholarship and Professional Activities for 2005 and Community Service for 2011.

Since 2012, he has served in JU’s Alternative Spring Break Program and has taken more than 400 JU students to Costa Rica and Ecuador for service-learning activities at orphanages and children’s centers. He has also led JU summer abroad programs to Mexico, the United Kingdom and the Philippines. Oldakowski has served as coordinator for dozens of survey and data gathering projects during the past 25 years, and these projects, along with other grants for teacher training, have brought more than $500,000 to the University. He has published manuscripts on cultural geography and geographic education in Material Culture, Geographical Review, Urban Geography, Journal of Geography, Southeastern Geographer, Florida Geographer, and Journal of Gerontology. 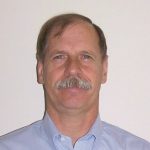 Dr. Fred Senftleber has been an energetic member of the faculty for 33 years. He served as Chair of the Department of Chemistry for 10 years and has worked on many University and division committees and task forces. Under his leadership and supervision, the Department of Chemistry reorganized the chemistry major and added the biochemistry track, instituted assessment programs for introductory courses and graduating seniors, added a capstone course, expanded the department’s instrumentation, and restructured the general chemistry courses to fuse the lecture and laboratory portions into a single cohesive curriculum. The courses make extensive use of hands-on cooperative learning techniques employing microscale experiments, computer probeware, and other forms of science technology. Swisher Science 2 and 3 have been redesigned and renovated to facilitate this more inquiry-based mode of teaching.

Over the years, Senftleber has been active in both pedagogical and scientific research. He has had six external grant proposals funded totaling more than $332,000 since coming to Jacksonville University. For more than 10 years, the grants help build a close cooperative relationship between JU and science in Duval County Public Schools. Two of the grants from the National Science Foundation enabled the University to purchase sophisticated chemical instrumentation for use in classes and research. His current research dealing with the development of sedimentation field-flow fractionation (FFF) instrumentation has resulted in the acquisition of two U.S. Patents, with an additional U.S. Patent and two European Patents pending.

Professors of the Year