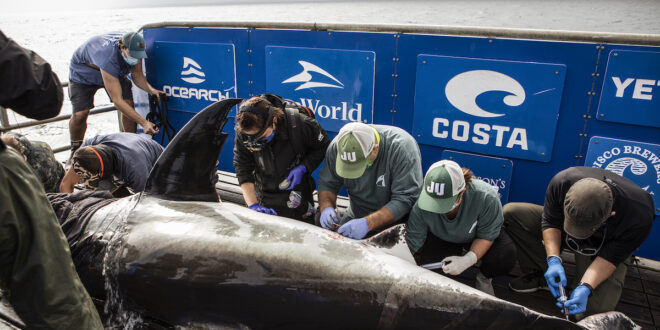 Utilizing an unprecedented data set, Jacksonville University Assistant Professor of Biology Dr. Bryan Franks published a comprehensive study in the Frontiers in Marine Science journal in November on the movement and migration habits of great white sharks in the Western North Atlantic Ocean.

Dr. Franks, who teaches in the Marine Science Research Institute, co-authored the OCEARCH study with eight shark scientists over the past year. But data collection on the 48 tagged sharks in the study has been ongoing since 2012.

Of the several great white shark populations in the world near Australia, South Africa and California, the population closest to the east coast of the U.S. and Canada is the most unknown in terms of their movements and migration, Dr. Franks said.

In the 1970s and 1980s, that population of sharks rapidly declined and has only recently started to recover, he said. That’s a big reason why not as much is known about them.

“Trying to examine their movements and migration in this region is ultimately important for conservation measures, trying to determine what the important areas are for the white sharks is valuable information for fisheries managers and enacting effective conservation measures for the population,” Dr. Franks said.

Dr. Franks and his team made several discoveries. They found that the Western North Atlantic sharks spend about six months near the Southeastern U.S. in the cooler months and then rapidly migrate to waters near New England and Canada in the warmer months where they feed on prey to store over the winter.

Pregnant female sharks tend to head out much farther east into the Atlantic, while most other sharks stay closer to the shore.

A big takeaway from the paper was that the sharks tend to return to the same general areas year after year, showing “fidelity,” Dr. Franks said. That was something that hadn’t been proven for Western North Atlantic white sharks in the past.

Now that more information is available about where sharks reside, the study can be used to inform conservation efforts.

While students didn’t co-author this paper, Dr. Franks said several of his students are working on other shark and OCEARCH projects. OCEARCH and Jacksonville University have a cooperative partnership to promote opportunities for student-centric scientific research and learning.

Combing through and analyzing thousands of data points in order to publish the study was a challenge, Franks said. It also meant being able to bring together nine of the country’s leading shark scientists to collaborate and share their expertises.

“Being able to work with some of the people that are involved with OCEARCH that are experts in what they do, I think that’s probably the biggest enjoyment that I get,” Dr. Franks said.